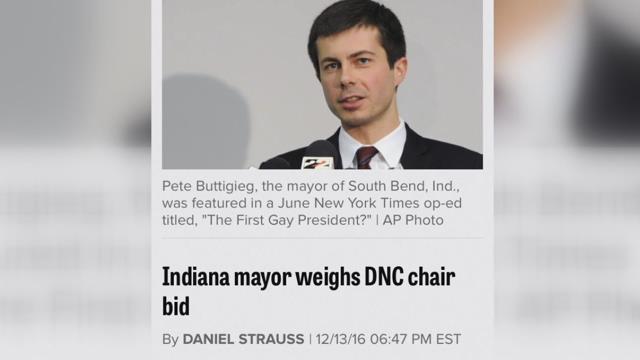 A Notre Dame political science professor discusses what a possible run for chair of the DNC could mean for South Bend Mayor Pete Buttigieg.

“The DNC chair has an opportunity to sort of shape the image of the party for the nation,” Notre Dame Political Science Associate Professor Christina Wolbrecht said.

A Politico report published Tuesday night said Buttigieg is considering jumping into the race for chair of the Democratic National Committee.

“Of the options before him, which are most consistently with this goals and how he thinks he can contribute?” Wolbrecht said, referring to questions Buttigieg is likely asking himself as he decides whether or not he’d like to run.

Buttigieg would inherit a party coping with a disastrous 2016 election cycle.

Wolbrecht said Democrats did not just lose the White House on November 8th.

“They’re behind in lots of other places,” she said. “They hold fewer governorships, they are the majority party in fewer state legislatures, they’re the minority party in both the house and senate. And so, they’ve got to build everywhere.”

Buttigieg would bring a fresh face to the party nationally.

Articles about him in The New York Times and Washington Post have helped boost his profile in recent years.

Wolbrecht said running for DNC chair and getting elected would allow Buttigieg to break through the confines of a very Republican Indiana.

Either way, she said the exposure of possibly entering the race will likely pay off.

“Even being considered for a position like this just sort of makes more people on the national stage  aware of who you are, of the positions that you have, of the experience that you offer, of the voice that you might be able to represent,” Wolbrecht said.

Wolbrecht said one con of being elected chair is that you’re chosen by party leaders and not the voting public, so the job boxes you off a bit from voters.

But if Buttigieg decides to enter the race, he’ll face at least four other candidates who are all vying for the spot currently held by interim chair Donna Brazile.

The winner will be chosen in February.