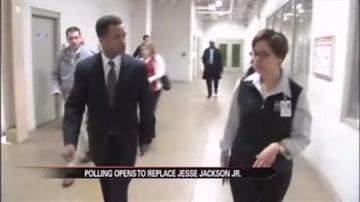 Turnout was expected to be low with the winter storm that is hitting Chicago.

Issues like gun control and ethics were main topics for campaigns.

Chicago has had some recent gun violence including the death of 15 year old Hadiya Pendleton.

One voting place even got the wrong voting machines.

"Judges did take their names and numbers, and they were notified that they can come and cast a paper ballot," said Jerry Jones, Cook County Board of Election.

Jesse Jackson Junior pleaded guilty last week to misusing campaign money to support a lavish lifestyle. He could face up to five years in prison when he is sentenced in June.