Polling places vs. voting centers, what to do next? 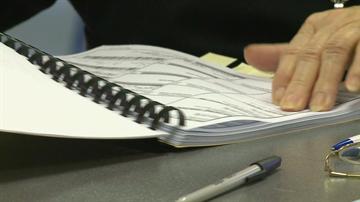 The county currently has 220 polling places, but with the change, it would have 25 voting centers.

The difference is that a person could choose the location where they voted, instead of it being assigned.

"The idea of voting center is definitely being entertained right now by the Election Board," said County Council President Rafael Morton.

Morton said the county would also add permanent satellite offices at places where people commonly do business, for example at schools, churches, and malls.

These would be installed 30 days prior to the election and would allow people to cast votes early.

Morton said the constant increase of absentee voting in the county is what sparked the conversation about voting centers.

In the 2008 general presidential election he said absentee voting rose to 28 percent.

This week the South Bend Common Council sent a letter to the county asking to be involved with the voting center research.

"Prove why is it better, prove why we should have it, prove all these different things instead of ripping away the system that has been such tradition to the electoral process," said Council Member Henry Davis, Jr.

Davis said he’s worried that by decreasing the number of places people can vote, this could hurt voters’ access.

In the letter the council asked that representatives from their group as well as community members be involved in a study to whether or not voting centers make sense for the St. Joseph County Community.

"We need to jump into the conversation and sit at the table," said Davis.

"I can’t speak for the Election Board, but I would say that would be welcomed, and that there is a plan to get public input," said Morton.

Morton said the issue of voting centers will most likely be revisited by the Election Board after the primary election.

He added that this debate is in its early stages, and the county plans to ask for public input in the discussion.