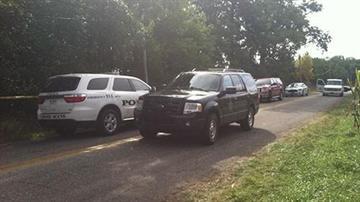 KOSCIUSKO COUNTY, Ind. -- A set of possible human skeletal remains were found Sunday evening in a wooded area along CR175 E near the Suburban Acres mobile home park north of Warsaw, according to the Kosciusko County Sheriff's Department.

The remains were found just after 6 p.m. after a teenager stumbled over the remains while out playing with his younger sister.

"Officers arrived and confirmed what they believed was potential skeletal human remains," said Sergeant Chad Hill of the Kosciusko County Sheriff’s Office. “We assembled a large number of our officers, detectives, as well as crime scene techs, who have actually come back out today to process the scene.”

A forensic anthropologist from Indianapolis is also on the scene.

One man who lives close by says he talked to the boy who found the remains last night.

“One of the kids that was in that group, a 14-year-old, he was the one that actually stumbled upon the body, he said he almost tripped over it," said Ray Hill. “He said it looked like a child, it was mainly bones, some clothes that were tattered, a little bit of hair on the bones and said that he saw a belt hanging from the tree.”

The boy spoke with ABC57 about the discovery.

"I was going to shoot my little BB gun and I was finding things to shoot at, like trash on the ground and then I stumbled across the body," said Kyody Wright. "It looked all blackish with somewhat blonde hair and all of the body pieces were separated."

Neighbors say it is scary this hits so close to home.

“Scared knowing that we’re this close to it. I’d say within 100 yards or so away from where the body was found, and I’ve got a two-year-old in there and a six-month-old and it’s really scary. And there’s a bunch of kids that run around here every day," said Ray Hill.

Investigators are not saying much about the remains but many people in this area can’t help but remember that just over a year ago, 18-year-old Aurora Shoemaker disappeared from the mobile home park that’s just across the road  from where the remains were found.

We asked police if they think the body could be Aurora.

“We’re not making any type of assumptive ideas about the actual identification of the individual or any clarification of whether it was a male or female at this point in time," said Sergeant Hill.