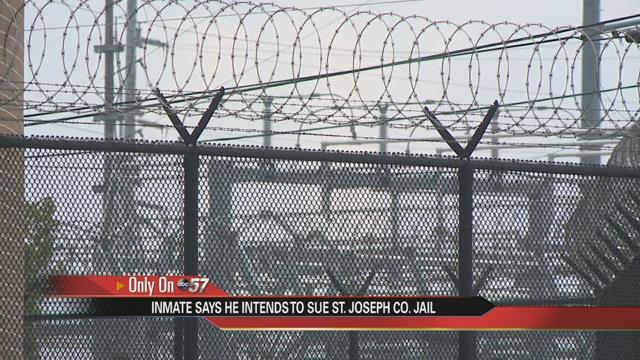 Your tax dollars could be at play in a future lawsuit against the St. Joseph County Jail.

A former inmate is filing a suit claiming he wasn’t properly treated when he had a seizure on July 30th.

Griffin said, “At first it took the guards only 30 seconds to get to me to make sure I’m okay and then when I started seizing and they left me there with another inmate.”

Griffin said his guard left him for 40 minutes in his cell unattended during the incident.

Griffin said, “I had a sharp pain in my chest like I was getting stabbed repeatedly and my heart was shrinking and I just felt like I was going to die.”

Griffin was incarcerated for conversion, and according to jail logs it was his first arrest in St. Joseph County.

Griffin said, "I made the mistake of stealing from a store.”

Thompson said, “Our nursing staff was on hand and actually encountered this person a couple of times, ultimately moved him to a different cell.”

Thompson said when each inmate is ingested, they are asked for their medical history.

Thompson said, "Every time somebody is booked into the St. Joseph County Jail we have a procedure that we go through that includes a series of medical screening questions.”

Griffin said he feels the medical staff should be held accountable.

Griffin said, “They went and finished the 'Medpass' to give all the other inmates their meds and it took them 40 minutes to complete that while I was still in my room seizing!”