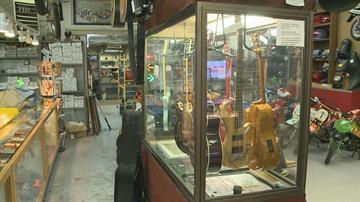 MISHAWAKA, Ind. – Shoppers lined up and crowded in for deals on the day after Christmas, not only at shopping malls, but also at pawn shops.

"I think people misunderstand, the day after Christmas is usually very busy for retailers, it's busy for everybody, people are antsy they're off and they're out buying stuff," explained Jeff Durrell, owner of McKinley Pawn on McKinley Avenue.  “We did a lot of business this year, we did a lot of business last year and I was well up this year, the traffic count was great.”

Durrell estimated at least 200 customers came through his doors on Monday, boosting sales by around 60-percent compared to the day after Christmas in 2010.  He said he believed shoppers are looking for good deals and the variety found in pawn shops.

“Quite a few jewelry pieces went out today, always tools, tools are always on the hot list, DVDs I have a lot of movies and stuff like that," he described.  “It's the standard pawn business, come in and negotiate and we'll get you taken care of."

The pawn business, he explained, has been getting better thanks to popular reality TV shows and possibly because shoppers are looking to stretch their dollars.  Whatever the reason, Durrell was excited to see this year’s sales so good.

“I didn’t expect it to be as good this year as it was,” he explained.  “I kind of expected the foot traffic to be down and no, they were out in full force.”

Just like many of the bigger stores, Durrell’s top sellers were video game consoles, he sold out of his entire supply on Monday.