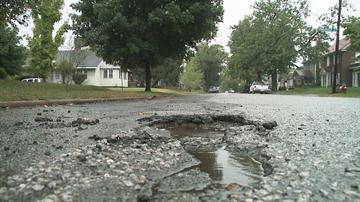 SOUTH BEND, Ind. – A South Bend Neighborhood along Diamond Avenue has a problem that’s literally driving it nuts. The streets are worn out and covered in potholes. Some say it could be coming from heavy truck traffic, but despite the cause this neighborhood is just asking for help.

"We need our streets fixed. Come on, it’s ridiculous. My concern is very much for safety and people around us. We live in this neighborhood. We want decent stuff here,” said Marilyn DuPriest who lives on Diamond Avenue.

And she’s not alone in her plea.

"This is one of the most neglected neighborhoods in the city,” said Carl Brookerd.
Bookerd has only lived along Diamond Avenue for over a year, but he said it’s time for something to get done. He especially wants to see the big hole in the intersection of California Street and Diamond Avenue out front of his house fixed.
The hole is a sewer repair that the city placed cones and caution tape around. The city said it’s going to be fixed starting Wednesday morning, but for the neighborhood they said the week they’ve been waiting for it to be done, is too long.
"I've got a two ton truck here that’s got to go through. My wife goes through here all the time. My children come through here,” said Brookerd.
And he’s not alone.
“What worries me about it is the whole is so deep. It’s probably about at least 12 inches deep and if this street is falling in right here, in the center, what is it doing to the left or the right of the hole with all the trucks coming?” said Rev. Greg Brown.
Heavy traffic seems to be a concern for a lot of the neighbors. Some neighbors said the heavy trucks travel along their streets at any time of the day and something needs to be done.
"Reroute the truck traffic or make this road up to taking the semi traffic,” said Brookerd.
And some even think the trucks are adding to the pothole problems.
"We need to get rid of the diesel trucks that come through here that mess with our streets,” said DuPriest.
While driving along Cleveland Road ABC 57 stumbled upon a long stretch of potholes and we called the city to see if there were any plans in the works to repair them. They city said they would send out a crew to check and within a couple hours, we checked back, and they were already filled.
But many in the neighborhood said until there are restrictions on the truck traffic, the problem won’t be fixed.
“There should be a certain weight limit or time of day that they can come through,” said Brown.
Share this article: