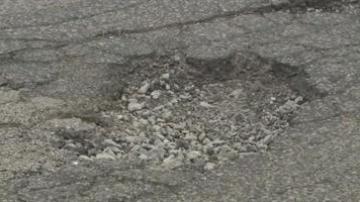 LINCOLN TOWNSHIP, Mich. -- Police in Lincoln Township are warning drivers to look out for potholes after several motorists were stranded and had to have their vehicles towed because of damage.

In some parts of Lincoln Township, drivers feel like they're in a real-life pinball game.

"You have to go really, really wide to get onto the highway. It's just horrendous," said driver Cheryl Tomaszewski.

Tomaszewski says I-94 and the state roads surrounding it are in bad shape.

"This on-ramp is really, really bad. Some of the back roads on the way to South Bend and stuff are really awful. It's just everywhere," said Tomaszewski.

Some of the potholes are so deep, drivers who hit them needed a tow truck.

Over the weekend there were more than 6 drivers who damaged their cars in potholes.

Crews say the recent rainfall is loosening up the roads and that's creating all sorts of headaches for drivers.

"I put two new tires on the front of my car since February," said driver Brian Krapec.

Krapec is doing the best he can to avoid them, but there are certain stretches on the road where that's just not possible.

He's eager for the road to be fixed.

"Hopefully the crews can get out here and throw anything in there to fill them," said Krapec.

"I just try to go around them as best that I can, but sometimes you actually have to hit them," said Tomaszewski.

MDOT said they are aware of the issue, but potholes are popping up faster than they can be repaired.