Power lines down across Michiana 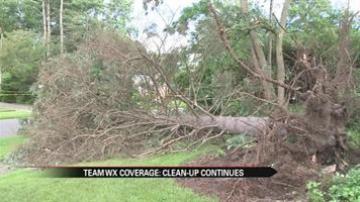 SOUTH BEND, Ind. -- Indiana Michigan Power held a press conference Tuesday night. The president of the company, Paul Chodak, said he is confident the power outages will not last longer than this week.

“We originally had 74,000 people out. Currently we have 54,000 people out in the Michiana area. So we’ve restored about 20,000 customers thus far. The expectation is that we’ll have 90 percent of customers on by Friday,” Chodak said.

Unfortunately many drivers across Michiana must deal with downed power lines for possibly a few more days.

Mary Jaicomo witnessed an electrical fire just feet away from her house.

“I heard a big pow and I could see the sky light up with fire,” said Jaicomo.

That big pow was a big tree falling down. It took several power lines with it.

“There were flames shooting up in the air and I was afraid our house was going to catch on fire,” said Jaicomo.

Bernale Dokes with South Bend’s Bureau of Streets said the corner of Cherry Tree and Coquillard is just one of at least four intersections he has had to close off because of power lines that are still down.

“It can be very dangerous. It all depends on if the power is still on. But you never know if it’s still on or not,” Dokes said.

Indiana Michigan Power said if you see a downed power line in the road do not try to approach the wires because it can be very dangerous.

Instead call their hotline or even emergency responders to block off the road.

Indiana Michigan Power said they expect to have all power restored to our area by Friday.