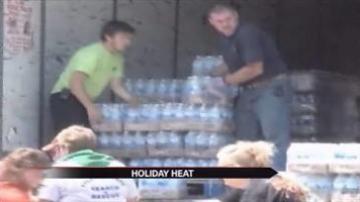 The widespread power outages and a stifling heatwave are putting a damper millions of Americans Fourth of July celebrations throughout the Mid-Atlantic and Midwest regions.

The extreme heat is now being blamed for eight deaths in Maryland and the number of deaths from the violent weekend storms has climbed to 22.

Utility crews are working around the clock to get the power back on but with nearly a million and a half customers without power, crews are facing an uphill battle.

Maryland's governor's pleaded for patience. But with the temps climbing into the 90s and no power means no air conditioning.