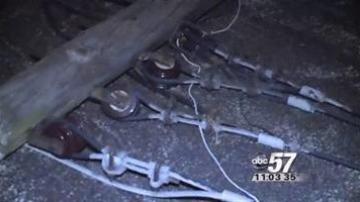 ST. JOSEPH COUNTY, -- Winds knocked out power to thousands of homes and businesses, but crews with Indiana Michigan Power have been working to get it restored.  Right now 763 customers in St. Joseph County are in the dark and 153 in Berrien County are as well.

But some are still without power right now, including a South Bend dentist office.  Workers may have the day off tomorrow.  Live wires kept employees and patients inside for hours.  A.E.P. come to shut off the power around 8 p.m., which means the office may be closed tomorrow.

Hygenist Lori Nine was doing a cleaning today when the power went out.

"The lights flickered and then maybe ten minutes later we heard this loud thud, actually the floor even vibrated", said Lori Nine.

At first she thought a car had crashed, then she looked out the window and realized mother nature brought down a telephone pole in the dentist's office parking lot.

"The wires were coming across the lot", said Nine.

Employees and patients were not allowed to move their cars.

"The fire department came actually and they did not know if the wires were still live", said Nine.

Many of them called for rides and decided to pick up their cars later.  However Nine's husband works in Fort Wayne so she was stranded at work for three extra hours.

"A.E.P., we had to wait until they came out and shut off the power", said Nine.

So she isn't sure if she will be coming back in the morning.

"Now, we just don't know if we will be working tomorrow.  We have already had to cancel patients until 11:00 p.m.", said Nine.

According to AEP, the office's electrical lines will need to be replaced, but AEP won't be taking care of it.  The Lovan Dentist Office will have to call an electrician.

A.E.P. says it will restore smaller circuit neighborhoods by 3 a.m.