Preschool employees say they're not getting paid on time 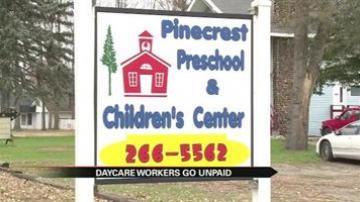 ELKHART, Ind. -- Employees at Pinecrest Preschool and Children's Center in Elkhart say on more than one occasion, pay day rolled around and they were handed checks that bounced or went home empty handed and were told they would be paid when state funding became available. The president says the daycare as been in his family for 23 years and now they are on the verge of losing it.

"You have a paycheck but you can't cash it, it's crazy," said teacher Ashley Ball.

Ball says this has been the story of her life for weeks.

"I took it to the bank and they were like, well no funds, this happened like ongoing, every day, every other day," said Ball.

She worked 40 hours a week at Pinecrest, but has nothing to show for it.

"It's hard just trying to make it and provide for your daughter especially when you have a job that you like getting up and going to but they're not paying you," said Ball.

She says she's in trouble. If she doesn't pay her car loan by Monday, they will repossess her car.

The day care says they won't have any money to pay her until the end of next week.

"We've been here 23 years, we've never had a payroll check bounce or be delayed except for in the last three months," said Robert Buss, President of Pinecrest.

Pinecrest is largely state funded. But Buss says that parents have been confused by Indiana's Tuition Assistance Program and that has left him about $15,000 short and he is struggling.

"We basically go by what's in the bank at the time, when payroll hit Tuesday there wasn't enough to cover it," said Buss.

Buss says he wants more than anything to stay open, but they will need help and fast.

"It's getting to the point where we might be hanging our hat up and call it quits, when we start having issues where we can't pay our help, it's just too devastating," said Buss.

Buss says his family has put everything they have into this daycare. He also says all employees will be paid, the money will just be late