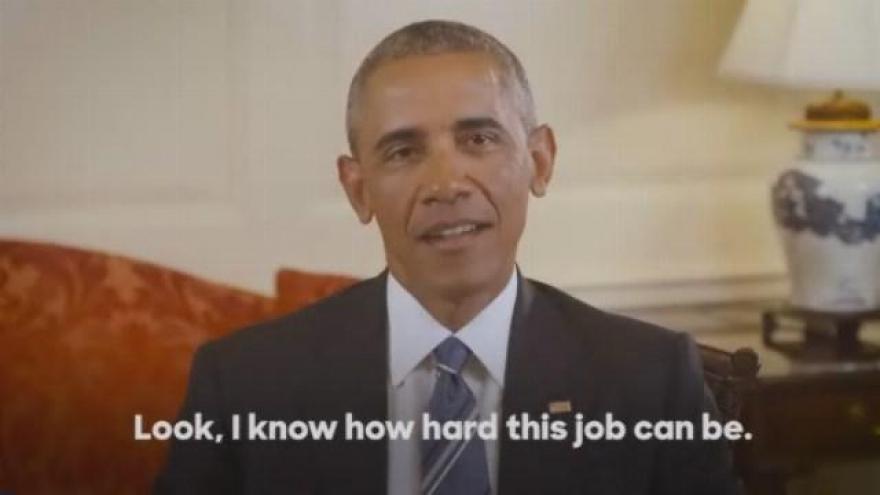 "I don't think there's ever been someone so qualified to hold this office," Obama said in the video.

"I want those of you who have been with me since the beginning of this incredible journey to be the first to know that I'm with her," Obama continued. "I am fired up. And I can't wait to get out there and campaign with Hillary."

Obama will campaign with Clinton next week in Green Bay, Wisconsin.

His endorsement made note of the historic nature of Clinton's being the first female presidential nominee of a major political party. Obama's endorsement brings full circle a relationship that began when the two were rivals in the hard-fought 2008 Democratic nominating contest.

"Honored to have you with me, @POTUS. I'm fired up and ready to go!" she wrote, signing it with '-H' to indicate the tweet was from the former secretary of state personally.

Clinton also thanked Obama for the endorsement in an interview with Bloomberg Politics, timed to be made public when the White House released Obama's endorsement video.

"It just means so much to have a strong, substantive endorsement from the President. Obviously I value his opinion a great deal personally," Clinton said. "It's just such a treat because over the years of knowing each other, we've gone from fierce competitors to true friends."

His endorsement signals an end to the Democratic primary battle between Clinton and Vermont Sen. Bernie Sanders, who has vowed to fight on through next week's Washington, D.C., primary, but on Thursday didn't repeat his previous claims that he will fight on through the party's convention next month in Philadelphia.

Obama tapped Clinton as his first-term secretary of state -- linking the two forever in history on decisions like the U.S. raid to kill Osama bin Laden and the military intervention in Libya.

The support came just hours after Obama met with Sanders at the White House.

A senior Sanders aide said the Obama endorsement "was expected" and described the senator's meeting with the President Thursday as "very good" and "positive."

"We have run a hard campaign and will compete in the District of Columbia primary, and are proud of what Senator Sanders accomplished," the source said.

The Sanders aide also described the discussions so far between their campaign and Clinton's as "positive."

"There are a lot of discussions going on right now and there will be discussions with the Clinton campaign about how to ensure Senator Sanders goals for a progressive agenda are addressed," the source said.

Beyond supporting his former secretary of state, Obama has many incentives to see Democrats maintain the White House and reclaim the Senate in the fall: Republicans have vowed to unwind his signature accomplishments, including his landmark health care law, his Iran nuclear deal and his renewal of diplomatic and economic ties between the United States and Cuba.

The President has also raised money for Democrats -- including a $10,000-and-up event in Manhattan on Wednesday.