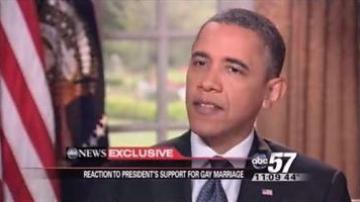 MISHAWAKA, Ind. – President Barack Obama says after years of working with and making friends with gay American citizens, he has had no choice but to change his personal opinion on gay marriage to yes.

“I believe gay couples should be allowed to marry”, President Barack Obama.

Local gays and lesbians couldn’t be happier about Obama’s change of heart.

“I’m happy we have the support of the most powerful man in the free world”, said a gay supporter.

Critics say it’s a move to increase his popularity before the upcoming election.  His presumed opponent, Mitt Romney, reiterated his opposition to the issue.

“I have the same stance on gay marriage that I did when I was governor.  I think it should be a relationship between a man and a woman”, said Mitt Romney.

The president says being around friends and family and co-workers in same-sex monogamous relationships is what really changed his mind.

“I think it is awesome he finally made a decision”, said a gay supporter.

And he says he thinks Americans are slowly coming around to the idea as well.

“I think it’s awesome, you know it is 2012 and I think we have fought for long enough”, said a gay supporter.

President Obama has kept one part of his stance on same-sex marriage the same.

He still thinks states have the right to choose.

And that is something both he and Romney can agree on.