President Obama: "Trayvon Martin could have been me" 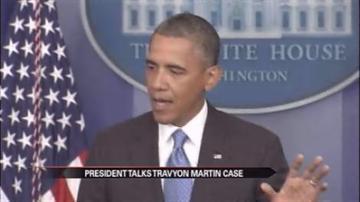 President Barack Obama spoke out for the first time since the George Zimmerman verdict, seemingly relating to Trayvon Martin personally.

"Trayvon Martin could have been me 35 years ago," said President Obama.

The case seemed to get President Obama to speak somewhat off the cuff. ABC News says he barely looked down at his notes while giving the address.

"A sense that if a white male teen was involved in the same kind of scenario, that, from top to bottom, both the outcome and the aftermath might have been different," said President Obama.

The president said that the United States should recognize that African Americans look at the issue with a history of racism in mind.

"There are very few African-American men in this country who haven't had the experience of being followed when they were shopping in a department store," said President Obama. "That includes me."