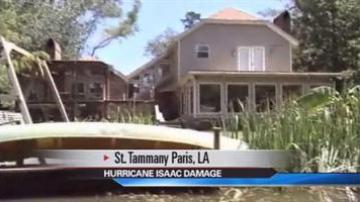 TAMMANY PARIS, La. -- President Obama took his first visit to the Gulf Coast to get a look at the damage left by Hurricane Isaac.

About a quarter of a million people are still without power in Mississippi and Louisiana.

And with the heat index hitting 105, the clean-up has been more than a just a chore.

"I've got two children under two. It's miserable," said Donald Mackenroth of New Orleans. "I have a generator now which is better but it's still miserable."

Remnants of Isaac are now moving to the northeast, bringing with it more rain and flooding. But also relief from the drought.