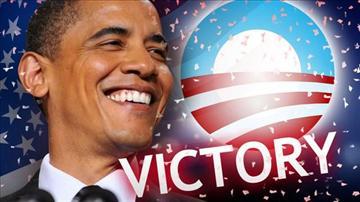 President Barack Obama is the winner of the 2012 presidential race.

Mitt Romney was declared the winner of Indiana early in the evening. In Michigan, Obama was the winner.

Pence pulled in 50 percent of the vote and Gregg had 46 percent with 85 percent of precincts reporting.

Libertarian Rupert Boneham got just 4 percent of the vote,

ABC has Obama with 225 Electoral votes and Romney with 186.

ABC has Obama with 148 Electoral votes and Romney with 159.

ABC has Obama with 123 Electoral votes and Romney with 153.

ABC has Romney with 76 Electoral votes and Obama with 64.

ABC has Obama with 64 Electoral votes and Romney with 67.

WRONG BALLOTS GIVEN OUT
Jason Aubrey has learned that some voters in Mishawaka were given the wrong ballot.

Some voters were supposed to cast a ballot with Penn-Harris-Madison School Board candidates, others were not - depending on where the voter lived.

Poll workers say the ballot packages were not marked clearly enough and they gave some voters the wrong ballots.

The poll workers didn't realize the error until between voter 250 and 380.

Poll workers say voters are as much at fault for not realizing they had the wrong ballot.

"If a person is unsure whether they are voting in a  school board district or not, make sure you give us a call. Don't ask for that ballot until you are sure you are getting the ballot that you need," said Rita Glenn, St. Joseph County Interim County Clerk.

It is one of three polling locations in the city and poll workers say since the doors opened at 7 a.m. there has been a constant line all day.

"I mean it's a long line, but I think everybody should wait, you know, because it's going to make a big difference," said voter Mayquon Morrison.

Some said they had been waiting over an hour.

"About an hour to an hour and a half, two hours, the lines are very long," said voter Rickey Napier.

VOTING IN SPACE
In this election, every vote counts - even those cast from space.

The Americans on the International Space Station, including Notre Dame grad Kevin Ford, are able to vote in Tuesday’s election.

Mission control in Houston emails a digital version of the ballot up to the astronauts, they fill it in -- and email it back.

It's then sent to the voting authorities.

The system was made possible by a 1997 bill passed in Texas since most astronauts live in or near Houston.

GOVERNOR'S RACE
Republican Mike Pence, Democrat John Gregg and Libertarian Rupert Boneham are all running for Indiana Governor. Boneham greeted voters outside a polling location on the West Side of Indianapolis.

He has stiff competition. Pence is a 6-term congressman and Gregg is the former Democratic Speaker of the Indiana House of Representatives.

INDIANA SENATE RACE
One of the biggest state-level races gaining national attention is in Indiana between Democrat Joe Donnelly and Republican Richard Mourdock.

Donnelly got a boost last month after Mourdock made a controversial comment on rape and abortion during a debate.

The senate seat up for grabs is currently held by Republican Richard Lugar who has been in office 36 years.

Mourdock cast his ballot near Evansville.

3:15 p.m. Florida and Virginia voters are waiting in two to three hour lines to vote.

2 p.m. Around 2 p.m. several precincts in St. Joseph County, Ind. began running low on ballots.
One precinct in Lakeville had just 15 ballots left at one point.

About 10-percent of the approximately 150 precincts in the county needed more ballots delivered for the rush of late afternoon voters.

"There is a little bit of a math and science to guessing how many, or guesstimating, how many people might come out to a poll; but at this point we are pretty much on and we appreciate the calls and like I said, we're going to make sure these people do not go without voting,” said Rita Glenn, St Joseph County Interim-County Clerk.

12:34 p.m. ABC57 heard from one voter who said he wasn't allowed to vote because he had an out of state license. We recommended he go to the nearest BMV to get an ID card - more info here.

We have compiled voting information for Indiana and Michigan voters

ABC has Obama with 143 Electoral votes and Romney with 159.