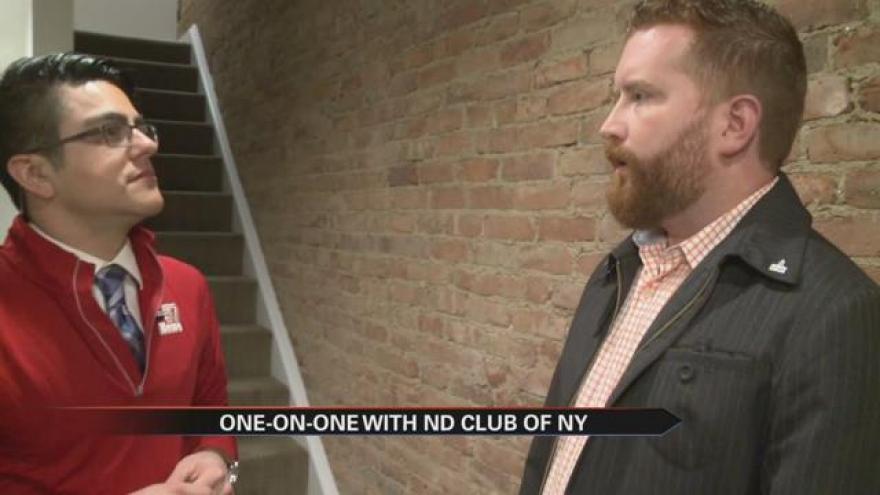 The excitement for Notre Dame basketball players and fans is starting to build in Brooklyn.

In less than 48 hours, the Notre Dame men’s basketball team will play in the first round of the NCAA Tournament.

The president of the Notre Dame Club of New York spoke with Vahid Sadrzadeh how fans and alumni can connect for events far away from South Bend.

Vahid Sadrzadeh: This is 100 years in the making now, right? 1916?
Andrew Wilson: Notre Dame Club will be 100 years old this year. We were founded in 1916. There were alumni that did events before that, but officially incorporated in 1916.  The club has been around a long time and been through a bunch of phases in the city’s life, but we made it. We took this year to celebrate it, and it’s a big part of it.

VS: There has to be a lot of fans here, with St. Patrick’s Day tomorrow and the parade tomorrow. Talk about that excitement.
AW: We are having a big week. We had an event for the Kelly Cares Foundation. We had the parade tomorrow. We have an ND event tomorrow night and then we have the game watch and pep rally Friday and Sunday.

VS: You expect mass capacity, so anyone can come out wearing their colors.
AW: We’re getting the word out—we had short notice. We were able to secure a venue. We just wanted to make it fun. If you are wearing ND gear, you can get in the door 7-9:30, and then if you want to stay and watch the game, you can.

Although the club has hosted many Notre Dame sporting events and watch parties in the past, this will be their first time hosting the NCAA Tournament.