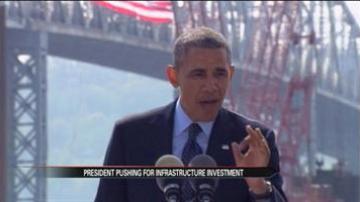 The President is using his visit to the New York City suburb of Westchester to ask Congress to replenish the highway trust fund.

In the backdrop was the Tappan Zee Bridge

The White House warned Congress Monday that without federal funding, more than 100,000 infrastructure projects could be suspended and 700,000 jobs may be lost.

According to the Associated Press, the fund will run out of money by the end of summer.