Pressure mounts for Akin to withdraw from U.S. Senate race 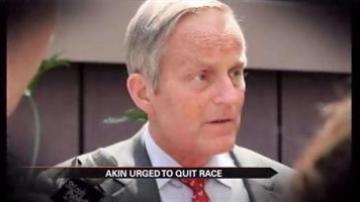 MISSOURI -- A congressman and U.S. Senate candidate is facing mounting pressure from all sides to step aside after he made some controversial remarks over the weekend.

The deadline for Missouri's Todd Akin to withdraw from the U.S. Senate race is 6 p.m. on Tuesday.

For more than 24 hours, Akin's phone has been ringing off the hook as a growing list of top Republicans are urging him to drop out.

Akin came under fire after saying only a few women who are raped actually get pregnant.

On Monday, his opponent Claire McCaskill said while she disagrees with his comments, he did apologize.

"What's startling to me is that these party bigwigs are coming down on him and saying that he needs to kick sand in the face of the Republican primary voters," McCaskill said.

Akin has shown no signs that he will drop out of the race.