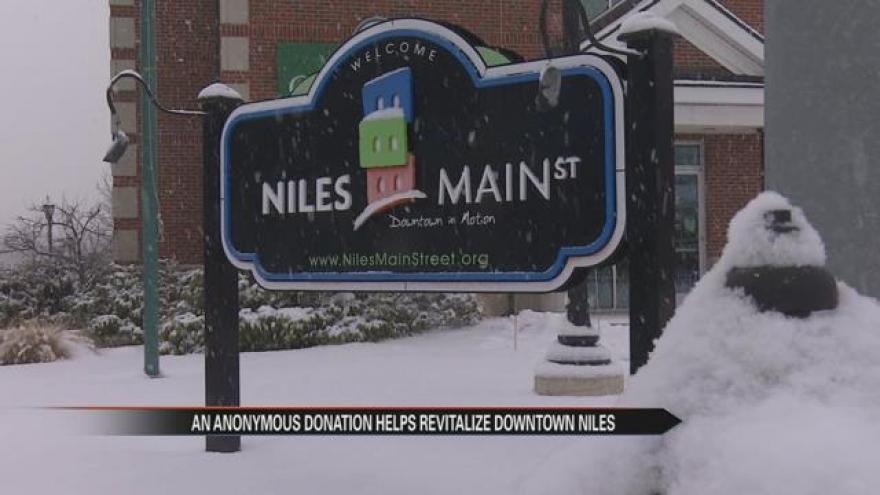 *Note to clarify: After this story first aired, it was brought to our attention that calling this donation 'anonymous' may be misleading. The donor asked for their name to be kept private, but they worked directly with the mayor and the Downtown Development Authority to form this program.

A private donation to the city of Niles now means free money for downtown business owners in need.

“We bought this building and it’s a glorified pole barn,” said Michael Reed, owner of Custom Computer Company in Niles. “No insulation. The outside is in rough shape.”

Reed opened his business in downtown Niles in January.

It’s a one-stop-shop for computer and digital repairs and services, as well as a community gaming area and computer lab.

But the old building it’s in looks like it always has on the outside. And inside, its dated construction means Reed can’t yet afford to heat it.

So when he found out the city was starting a downtown improvement program after receiving a private donation of nearly $70,000, he was the first to apply.

“Having an entire outside renovation to where it’s not going to look like the same building – when people drive by, instead of saying, ‘Oh! That’s the old skate shop’ or whatever, they’re going to say, ‘When did that building get there?’ said Reed. “It’s going to catch their eye.”

The program offers three options for downtown business owners both young and old.

You can apply for a match façade grant, where the city will match up to $5,000 for pre-approved work on things like windows, siding, paint and more.

A low interest loan program offers up to $5,000 for physical improvements like an HVAC, plumbing or electrical work. You pay it back over three years at a 2.6-percent interest rate. And you must be able to match 25-percent of the loan upfront.

The third option is for architectural design assistance.

You can apply for an on-site visit to discuss short and long-term façade improvements.

Reed said he and his team were convinced to start renovations early because of the program.

“This kind of gave us the motivation to say, ok, we’ll do it sooner than we thought, but we have the city backing us,” he said. “We have the city saying, ‘We’re willing to help; we want you to succeed here.’ And I think that’s going to make a huge difference just in the mindset of some of the business owners downtown.”

“I think as we develop our downtown and we make our downtown stronger, I think that will fan out and hopefully extend to the rest of the city of Niles,” said Shelton.

The program is just starting up, so you have time to apply if you’re an interested business owner in downtown Niles.

Mayor Shelton said you can reach out to him or the Downtown Development Authority for more information.