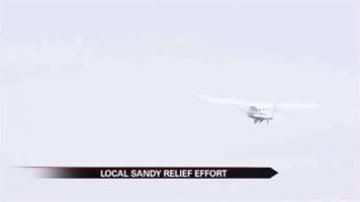 ELKHART, Ind.-- When Michael McConnell saw the devastation caused by Hurricane Sandy, he felt the same heartbreak we all did.

"Like everyone, I was just stunned and amazed at how much destruction in such a heavy populated place," McConnell said. "You don't think of New York being hit with something like that."

McConnell is a private pilot from Peoria, Illinois who's helping out with relief efforts.

He flew into the Elkhart Municipal Airport early this morning to load up on supplies from the Elkhart Chapter of Feed The Children.

"Our mission is to help those in need," John Tracy, Distribution Center Manager, said.

Over 500 pounds of cereal and oatmeal was packed into this small carrier plane.

It's only part of what Feed The Hungry plans to do.

"In Elkhart alone, we're preparing about ten trailer loads of food and other personal care items to go into the devastated area," Tracy said.

"Small aircrafts have a really big advantage," McConnell said. "We can get in and out, and get a lot of supplies there in a short amount of time."

After getting gassed up, McConnell started his engine, and was wheels up on his way to New Jersey.

"It's nice to have a mission," McConnell said. "It's nice to feel rewarded for helping to contribute even on a really small level like this."

He plans on making more delivery trips throughout the week.