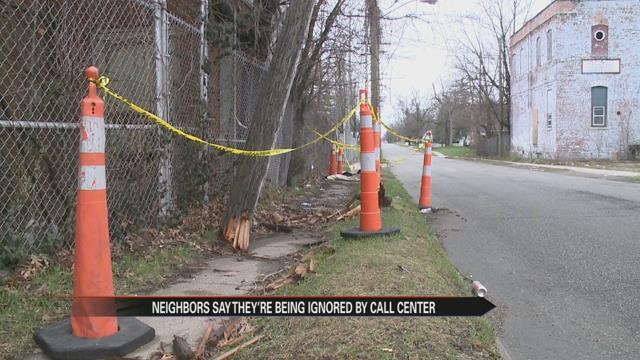 One man living near Muessel Grove Park claims that after contacting 311 for months a community problem is not being solved. A complaint was filed using the 311 app last week.

That complaint says a broken pole has been an issue for at least three weeks.

The complaint can be seen here.

It’s on Elwood Avenue and Medora Street that a split pole blocks a side walk, which is often used by pedestrians.

“I said what are you going to do wait until a kid gets hurt then you are going to worry about it,” says Fred Sonneborn, a South Bend Resident.

Sonneborn says he has seen the pole down for quite some time in his neighborhood near Muessel Park.

“Well it’s been like that since about Christmas,” says Sonneborn.

On Monday, the pole, cracked at the base and hanging onto two lines strung above, still has not been fixed.

“I’ve called three times to 311 I don’t like to bug them but I mean let’s get something done,” says Sonneborn.

ABC57 was also unable to get the director of 311 to return our calls.

“They are fine, polite, and all but it’s basically the answers you want to hear. Yeah we are taking care of it but when?” ask Sonneborn.

Without any answers from 311, ABC57 reached out to Indiana-Michigan Power. A representative says crews have been out to the down utility pole in late January and again on Friday march 25th.

The area supervisor says this pole is not a power line but a communications line that actually belongs to AT&T.

“I think it’s one of those who is in charge and how do we get it replaced ya know they are waiting for that person to step up, but I think the city should take the ball and do it,” says Sonneborn.

City representatives say the city of South Bend does not own the line so city crews can’t touch it.

ABC57 called AT&T who took a report of a damaged pole. A representative says a crew will be on site at the damaged pole sometime Tuesday.

In the meantime neighbors like Sonneborn are worried nothing is going to change.

“I’ve been in this neighborhood for over 60 years and so I see them walking all the time going to martins and the stores I go by this area maybe four or five times a day,” says Sonneborn.