Professor: Americans should pay attention to situation in Syria 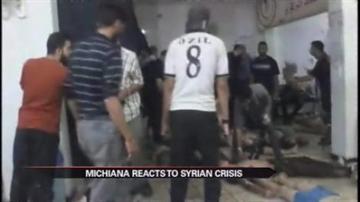 SOUTH BEND, Ind. -- As the president seeks approval from Congress to take action in Syria, many are skeptical about whether the US should get involved.

The threat of military intervention in Syria is an issue that gives many Americans flashbacks to the war on terror that started after 9/11 and continues to this day.

The Syrian government denies using chemical weapons on its own people, but the evidence seems to say otherwise.

President Obama says it is necessary to send the message that chemical warfare is unacceptable.

An international relations professor at Saint Mary's spoke to us about the unraveling situation.

The professor said the decision ultimately lies with congress, but every American should educate themselves on what is happening in Syria.

If you haven't been following it - it's not too late to start.

Since March of 2011 more than 100,000 Syrians have been killed, but what does that mean for people in Michiana?

"You don't want to see in any situation people getting gassed by poison or shot by guns that are supposedly from people that are from your own country," said Greg Siems, master's student at Notre Dame.

Siems studies political science at Notre Dame. He considers himself to be well informed, but says not everyone is.

"A lot of college students are more concerned with their next assignment or where the next party is," said Siems.

That's what the Center for Social Concerns wants to change.

"When we were planning our year's events we knew that we had to do something about the people affected by the crisis in Syria, particularly those who are displaced and those who became refugees in other countries," said Rosie McDowell, chair of the Justice Education Team at the Center for Social Concerns.

One professor says it's his duty to follow the crisis closely.

As a teacher of young minds-he says an American intervention could be controversial.

He says it's important for all Americans to think more broadly, To understand what our president must consider before taking action in Syria.

"Polls suggest the majority believe we don't need to act. So he wants to get the approval of Congress because it will perhaps give the public the sense that there's been debate and my Congress people think it is a good idea- if they do and that's the question," said Marc Belanger, Chair of the Political Science Department at St. Mary's.

No decision can be made until after Congress is back in session Monday September 9th.

It's not too late for your voice to be heard. Reach out to your local legislators and let them know what you think before the debate begins on the hill.

Senator Dan Coats (R-Ind.) today made the following statement regarding the president’s request for Congressional authorization of the use of military force in Syria:

“The president's decision to set a 'red line' with Syria while failing to have a long-term strategy in place unfortunately has left the U.S. without any good options. I am pleased, however, that President Obama is seeking authorization from Congress for potential military action in Syria so the American people can have a voice in this debate. I will be traveling across Indiana next week to hear from Hoosiers so I can take their views back to Washington. I will continue to urge the administration to work with our friends and allies on a comprehensive strategy to address the broader challenges throughout the region.”

As a member of the Armed Services Committee, I am following the situation very closely.  I support President Obama's decision to seek Congressional approval. Like all Hoosiers, I strongly condemn the use of chemical weapons and am carefully reviewing proposed options for ongoing humanitarian assistance and possible military action. I was in Washington on Sunday for the classified briefing and look forward to the debate.