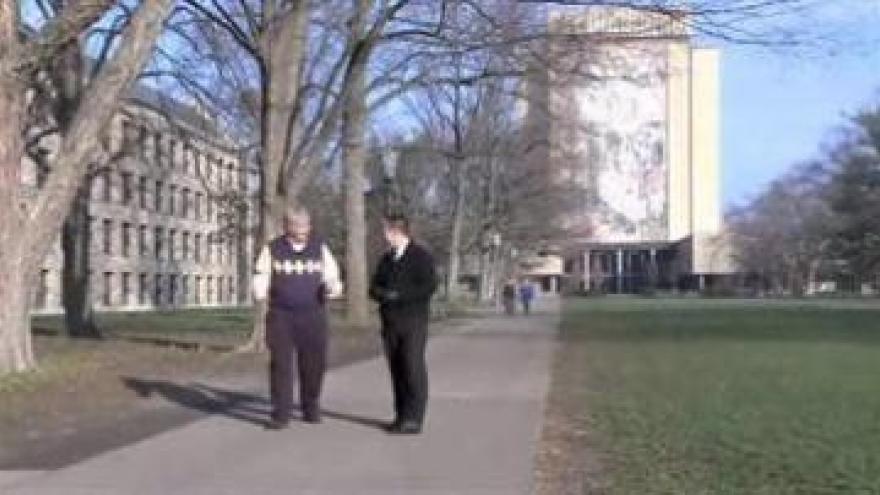 NOTRE DAME, Ind. -- "Never before have I directly intervened in a Notre Dame football game."

Nearly 30 years ago, Bob Quakenbush watched the Fighting Irish get pummeled for their third straight loss. Amidst the torrential downpour, the idea for a potentially prophetic book was planted in his brain.

"There was this fellow a few rows behind me that stood up in his poncho and said to no one in particular, but he just shouted out, ‘I know what it is folks, I know what it is; God is mad at us!,'" said Quakenbush

In his book, “The Gipper’s Ghost,” God sends the souls of George Gipp and Knute Rockne to resurrect a winning tradition at the university.

The story is rife with strange coincidences and similarities that some think can only be divinely inspired.

"The people who have read the book have been calling to remind me. They say, 'Bob, do you remember the name of the head football coach in the "Gipper's Ghost"? I said, ‘Well of course I do. It’s Coach Kelly,’" said Quakenbush.

"They observed Coach Kelly as he headed away. 'That’s his poor soul,' said Rockne, this is his third season at Notre Dame. He came here determined to turn the Notre Dame program around," said Quakenbush.

In the book, God commands the soul of Knute Rockne to deliver the Ten Commandments of Notre Dame. The tenth and most important one reads: "Thou shalt never lose to USC." And for more than a decade after Quackenbush's book was published in 1985, Notre Dame went unbeaten against their rival.

Today Quakenbush said the spirit of Notre Dame is alive and well.

"As some of my friends call it, the prophecy has come true," said Quakenbush. "Coach Kelly is leading Notre Dame to glory and hopefully our Coach Kelly, from today, is going to turn fiction into fact."

The book's climax focuses on the final game of the season with Notre Dame beating USC to top of an incredible season.

“Notre Dame was the unanimous choice as national champions and Coach Kelly was voted Coach of the Year," said Quakenbush. “If the real season ends as successfully as the mythical or fictional season in the “Gipper's Ghost", the Notre Dame faithful and the Notre Dame family are going to be very, very happy."

Quackenbush originally wrote the book to inject some humor after a disappointing season. Today he hopes it rekindles the spirit of Notre Dame and heralds the beginning of a new era in Fighting Irish football.