Proposed bill would require dogs or cats to be spayed/neutered 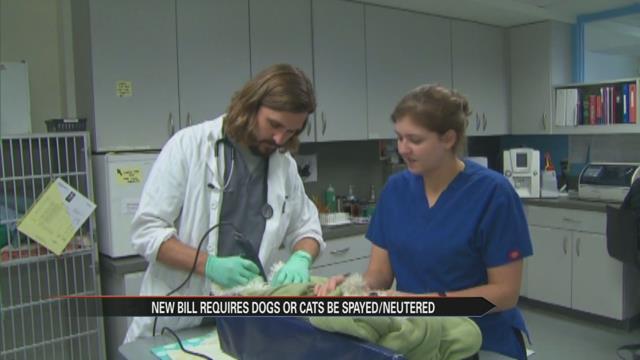 A lack of mandatory spay and neuter laws in Indiana has some people believing that contributes to thousands of dogs and animals being euthanized in the state each year.

House Bill 1201 would require that a cat or dog be spayed or neutered before adoption from an animal care facility.

An Indiana University study shows 40% of the over 100,000 dogs and cats brought into shelters in Indiana are euthanized each year.

And those supporting Bill 1201 say there would be fewer animals to euthanize if they weren’t reproducing so fast.

Faye Hinton, a rescuer with the animal protection association says the problem exists because education on this issue doesn’t exist in some areas.

“Because people take them out into the rural areas and just dump them. And these people that you find in the rural areas that have 20, 30, 40 animals that's the main reason. They let 'em stay and then they multiply, and you know how fast they can multiply,” said Hinton.

Those against the bill like the American Kennel Club say it’s unfair to responsible pet owners.