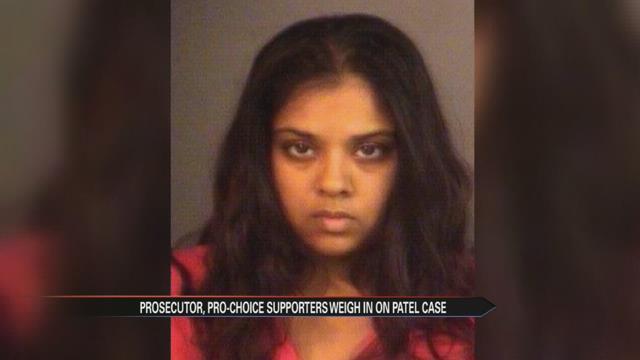 Purvi Patel is back home after being released from prison this morning. Prosecutor Ken Cotter explains why she was released, and one pro-choice supporter reacts to the news.

“It doesn’t necessarily have as much positive connotation as you might think just because of that detail of the release,” said Elena Sucharetza, a pro-choice supporter.

That detail is that Patel still served time for another conviction.

“She was convicted of neglect. That child was alive,” said St. Joseph County Prosecutor Ken Cotter.

Still, Patel was released from prison this morning after serving 525 days with the Indiana Department of Correction.

After tallying up her credits, Patel officially served 1,050 days in prison—almost three years—which is the maximum sentence for a Class D Felony of Neglect of a Dependent.

The St. Joseph County Court resentenced her to 18 months without a new hearing.

“IF there are no changes in what was presented at the original sentencing hearing, the court can just say I’m just going to do a new order, because that’s all that’s necessary .In this case, that’s what the court did,” said Cotter.

Since Patel had already almost served the maximum sentence, the prosecutor found it unnecessary to ask for that extra month in resentencing.

She didn’t have to serve time for the initial feticide conviction, however, because it was vacated back in July.

Sucharetza agrees with this part of the court’s decision.

“I feel like applying the feticide law to a self-induced abortion is completely out of line with the original intent of that measure,” said Sucharetza.

The intent of the measure was to protect children—not to punish mothers, she said.

“So going forward in the state of Indiana, any expectant mother will never face a feticide charge. That’s what our courts have said that our legislature wrote,” said Cotter.

“I just think that the entire thing is kind of frightening and kind of an indication that Indiana in specific and also the United States, even though Roe v. Wade is legal, is becoming just increasingly hostile towards women’s reproductive health,” she said.