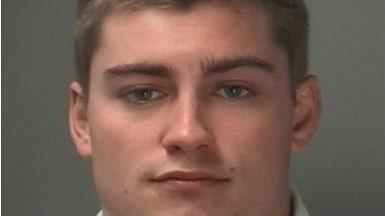 (CNN) - A former Indiana University student accused of raping two students pleaded guilty to a lesser charge in a deal with prosecutors that could spare him jail time.

John Enochs was sentenced to one year of jail but only if he violates probation, Monroe County Chief Deputy Prosecuting Attorney Robert Miller said.

Enochs pleaded guilty to the battery charge and the court entered the charge as a misdemeanor instead of a felony, which was up to its discretion, Miller said.

The sentence drew criticism for being what some said was too lenient. Some compared it to the recent sexual assault case out of Stanford University that ended in a sentence also criticized for being too lenient.

Advocates say they're concerned that sexual assault cases involving college students often result in sentences involving little to no jail time, something that minimizes the conduct, they argue.

'This isn't the Stanford rape case'

Enochs' attorney, Katharine Liell, rejected such comparisons. In the Stanford case, defendant Brock Turner was convicted and sentenced to six months in jail, though he is likely to get out in three. In Enochs' case, prosecutors acknowledged problems with the case and chose a plea deal.

"This isn't the Stanford rape case -- this is as far from it as you can get," she told CNN.

For proof, one need look no further than prosecutors' decision to drop the rape charges, she said.

"As the Monroe County prosecutors' office has acknowledged through their voluntary dismissal of the rape charges, John Enochs did not rape anyone and he should never have been charged with these offenses," she said.

"John Enochs did admit to conduct in one instance that the Court found to be a misdemeanor. He is profoundly sorry for his lack of judgment and has apologized for his conduct," she said. "Issues of alcohol and sexual misconduct are serious issues on college campuses across the country, but such issues are trivialized when law enforcement misrepresents the true facts and fails to investigate the allegations fully and fairly."

There's a tendency to overlook how "purposeful and dangerous" the conduct is when cases lack "traditionally forceful elements," such as weapons or overt violence and alcohol is involved, said former Philadelphia assistant district attorney Jennifer Long, CEO of AEquitas, which advises prosecutors in sexual violence prosecutions.

"Some cases are pled down because there's a belief, rightly or wrongly, or a perception that cases with these factors -- alcohol, no weapon, no physical injury -- can be seen as difficult or impossible to win," she said. "I don't think that's true but that's the perception and then it becomes the reality."

In cases where alcohol is involved it highlights a double standard, she said. Perpetrators become less blameworthy and victims become more responsible for what happened to them.

The allegations against Enochs

Enochs turned himself in last September and served one day in county jail after he posted bail.

According to a probable cause affidavit, a student reported in April 2015 she had been raped at the Delta Tau Delta fraternity house by an unknown male and "did not remember very much about it."

Enochs' attorney told CNN that Enochs admitted to some "rude touching" which ultimately resulted in the charge being amended to battery.

"There was some misconduct he needed to admit to and he did," she said.

After the 2015 complaint surfaced, the investigating officer contacted the student from the alleged incident in 2013, according to Miller.

"After hearing about a second assault, [the victim] decided she needed to have closure, so she agreed to proceed into a criminal investigation," the affidavit said.

Her friends told the investigator they observed Enochs naked on top of her, according to the affidavit.

The victim from the 2013 case is pursuing civil action against Enochs, Delta Tau Delta, and other parties. Due to the civil suit, Delta Tau Delta International Fraternity has no comment, said Jim Russell, the executive vice president of Delta Tau Delta.

Jeff Herman, the attorney representing the victim in the 2015 incident, says his client feels "disappointed" in the result of the deal. He says his client is also pursuing civil action against Enochs.

"The fact that he served one day in jail while she has virtually a life sentence of suffering seems inherently unfair," he said.

Enochs' attorney said the lead investigator "presented false and misleading evidence" in her probable cause affidavit. She also said problems with the 2015 case's DNA testing analysis contributed to its downfall.

She says Enochs has conflicted emotions on the plea deal.

It's "anxiety producing," she said, "when you live under the pressure of being falsely accused of a heinous crime."

The Monroe County Prosecutor's Office called the outcome "frustrating" and acknowledged evidentiary issues with both charges.

"This case presented a very unusual set of circumstances in that we had two unrelated accusations, two years apart. That was an important consideration in our initial decision to charge," a statement from the prosecutor's office said. "After the case(s) was filed, evidence continued to be developed that led us to the conclusion that neither case, standing alone, presented sufficient evidence to prove rape."

The student's decision in the 2013 case to come forward two years later "severely hindered" the investigation, Miller said. She could not specifically recall the event due to the passage time and alcohol consumption; nor could her friends.

"There were also photographs that contradicted the assertion that the complaining witness was incapable of engaging in consensual activity shortly before the alleged assault. This is important because the complaint was that she was 'unaware' that the sex was occurring due to her consumption of alcohol," the statement said.

"In that case there is video evidence of activities of the complaining witness, before and after the alleged assault, which does not support the assertion of a forcible rape, which was the charge in this instance. There is also DNA evidence that is problematic, and made it impossible for us to prove that the defendant was the cause of her injury," the statement said.

"This turn of events was frustrating for us as prosecutors, due to the fact that there were two complaints against the defendant. That fact is the reason we continued to pursue accountability on his part which lead to this plea agreement."

Enochs is no longer a student at IU, said Mark Land, associate vice president of public affairs at Indiana University. He declined to comment on the cases due to federal privacy laws and would not confirm the circumstances under which Enochs left the school.

Do sentences impact the victims?

Cases in which defendants receive little to no jail time can deter victims from coming forward, said Alison Kiss, executive director of The Clery Center for Security on Campus, which advises college and university communities on how to improve campus security.

"We know that many of these cases don't even make it to local enforcement or to prosecution because victims choose not to go forward," she said.

"Our concern when we see lenient sentences is it will make fewer students come forward to prosecute."

She said sexual violence on college campuses is viewed as less dangerous for some reason, especially when people know each other.

"The perception of stranger rape being more traumatic or scarier than rape where two people are known to each other is just a false perception," she said, "but unfortunately we see it perpetuated in many cases."