Prosecutors use shooting video as evidence in Pistorius case 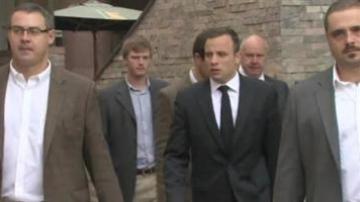 It is day three of testimony from Oscar Pistorius and it was one with tough cross examination.

He says he thought she was someone breaking into his home.

To prove he took aim, prosecutors showed the court video of Pistorius shooting a watermelon at a gun range. They then showed graphic images of his girlfriend's head wounds leaving Pistorius in tears.

"I've taken responsibility but I will not look at a picture where I'm tormented by what I saw and felt that night. As I picked Reeva up, my fingers touched her head. I remember! I don't have to look at a picture--I was there," said Pistorius.

The prosecution is trying to pick apart his defense.

They claim his statementsat his bail application hearing and his testimony at the trial do not add up.