Protests break out in Charlotte after armed man killed by police 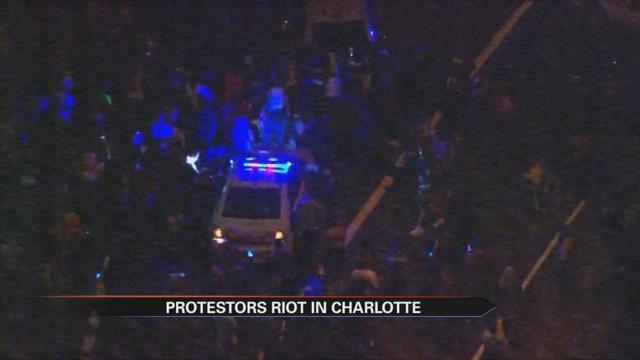 A crowd gathered near the scene of the shooting Tuesday evening. Reports indicate those were peaceful to start. But later, the riot gear came out. And so did tear gas.

Shortly after some news video showed demonstrators smashing out the windows of police cars. The protests then moved to the highway, with traffic blocked off on I-85.

According to our Charlotte affiliate WSOC, protesters took things out of trucks and set them on fire.

16 officers were injured, according to Charlotte police.

Sources say at least seven people were hospitalized with minor injuries and five others were arrested.

According to CNN, North Carolina Gov. Pat McCrory said in a statement Wednesday, "We will do everything we can to support the mayor and the police chief in their efforts to keep the community calm and to get this situation resolved.My prayers are with the Scott family and also our law enforcement, especially the 16 police officers who were injured last night."

Scott's family claims he was reading a book in his car when officers shot him. However, police say they did not find a book at the scene.

Charlotte-Mecklenburg Police Chief Kerr Putney says Scott exited his vehicle with a handgun before he was shot.

The officer who shot Scott was not wearing a body camera.

This is the sixth officer involved shooting in Charlotte this year. Officers were cleared of wrongdoing in the previous five.