Psychologists say Holycross may struggle with a personality disorder 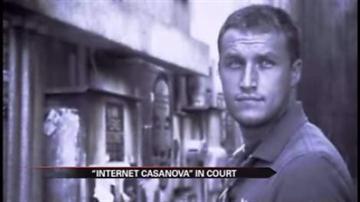 SOUTH BEND, Ind. -- Raymond Holycross made his first appearance in the St. Joseph County Courthouse on Friday when he was arriagned for theft.  According to police and over twenty victims, Holycross has scammed dozens of women across the nation.  Psychologists say Holycross may suffer from a personality disorder.

Women that fell victim to Holycross say that he lied about everything.  They say he lied so much, that even he believed his lies.

Clinical Psychology Professor at Saint Mary's College, Catherine Pittman explained, "Being born with a certain type of brain and being treated a certain way together, you might end up having a certain pattern of behavior."  She went on to say that the excessive lies, the need to exaggerate achievemnet, and constantly taking advantage of people are all signs of a personality disorder; possibly Narcissism or Antisocial Personality Disorder. Neither of which are often cured.

One local woman feels no remorse for Holycross.  Theresa Bridegroom had her heart and camera stolen by the Casanova.  On Friday, she had a front row seat at his arraignment.

"He kind of had a look of disgust on his face, like he couldn't believe that I had charged him." Bridegroom said.

Psychologists say that if Holycross is sent to prison, his personality disorder may worsen because he will be going even longer without getting help.