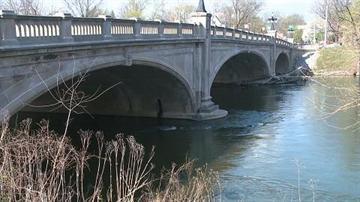 SOUTH BEND, Ind. – Several people living in the Historic District near the bridge showed up to find out if the current weight limit would be part of the plan. It was not and they were less than pleased by that.

The Indiana Department of Transportation (INDOT) hopes to have the bridge repaired before Notre Dame kicks-off its football season this fall.

That means, the agency will have to pick a contractor by the end of May.

But before they can do that, the public gets to weigh-in on the plan; and many did so tonight at the St. Joseph Public Library in downtown South Bend.

Those that showed up were relatively pleased with most of the plan.

The omission of a post-rehabilitation weight restriction was concerning to some, however.

Traffic across the bridge was limited to one lane in both directions for weeks, last summer.

Then in the fall, just in time for the Notre Dame Football season, all lanes were reopened but a weight limit was imposed.

Since then, trucks weighing more than 10 tons have been banned from crossing the bridge.

According to INDOT, this measure was taken to reduce the amount of damage the bridge would suffer before it could be fixed.

Meanwhile, a portion of the decorative railing on the bridge has shown rapid deterioration; the center portion on the east side of the bridge is now leaning out over the water.

It is a problem INDOT expected to have to fix in 2014, according to estimates from engineers in 2006, said Matt Deitchley, a spokesman for INDOT.

The last time the bridge underwent a major project was in 2006, when the bridge’s deck was replaced.

Five years later, engineers noticed cracks in the arch ring were worse than they had anticipated. This forced the agency to move up its rehabilitation time table.

The estimated cost to repair the arch ring cracks, the cracks on the decks paved surface, and the replacement of the railing, is about $2 million.

That’s close to what it cost to put the new deck on the bridge in 2006.

According to Deitchley, engineers estimate no further repairs will have to be made for about 20 years. He does however admit, anything can happen with a piece of infrastructure this old; the bridge was built in 1914.

People living near the bridge don’t think it will last that long at all. They believe heavy truck traffic will ruin the bridge long before it reaches the 20 year mark.

They want to see INDOT make the weight limit permanent, but the agency is hesitant to do so.

According to Deitchley, engineers believe the bridge can handle the heavy truck traffic for another 20 to 30 years, as long as minor maintenance is conducted on the bridge.

But that’s maintenance that may not be as frequent if the large vehicles were prohibited from crossing the bridge, according to residents in the area. Not to mention, it could mean the taxpayer dollars might be used for other projects instead.

Still, the bridge is one of the main thoroughfares feeding directly into downtown South Bend and the heavy trucks use it to get to businesses there.

Meanwhile, residents argue the trucks could come in from the by-pass instead.

Public comment for this project is open until April 6, 2012.