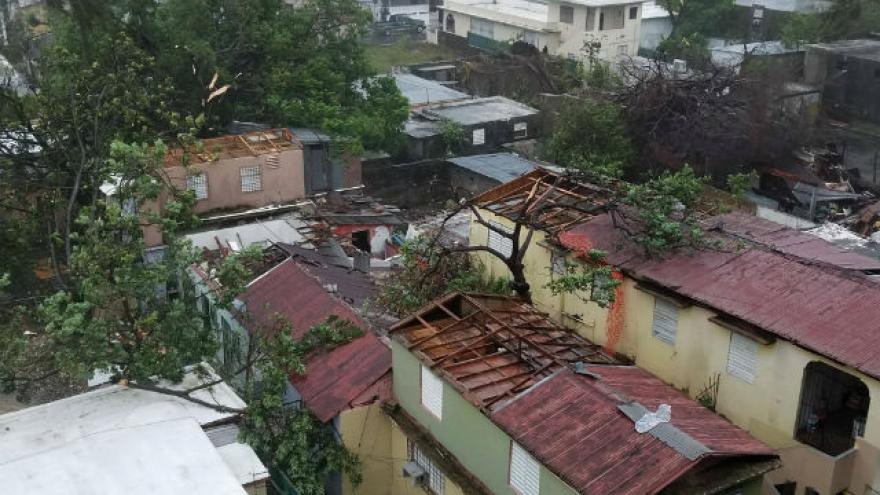 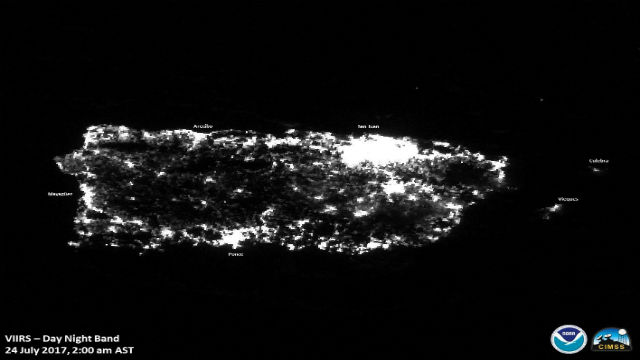 Satellite imagery taken by the Suomi NPP satellite helps show just how massive the power outages are in Puerto Rico. Comparing two images, one taken July 24 and the other just yesterday (Monday, September 25), the difference is startling. NOAA

(CNN) -- A week after Hurricane Maria ravaged Puerto Rico, millions of the US commonwealth's residents are struggling to survive without basic necessities.

In the town of Utuado, Lydia Rivera has started to ration crackers and drink rain water to keep her two grandchildren alive.

The storm hit the US territory last week, killing at least 16 people and knocking down power, communication and water grids across the island. But the recovery efforts there have been markedly different from those in Texas and Florida after recent hurricanes. 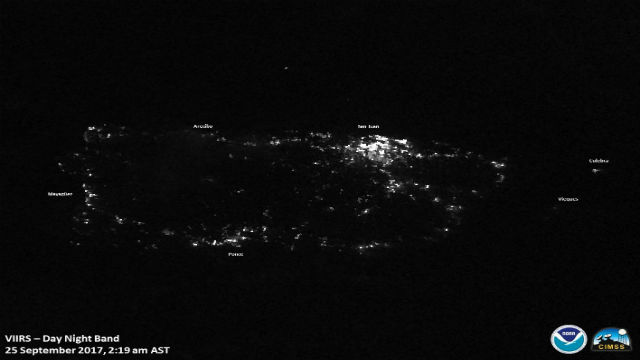 Satellite imagery taken by the Suomi NPP satellite helps show just how massive the power outages are in Puerto Rico. Comparing two images, one taken July 24 and the other just yesterday (Monday, September 25), the difference is startling. NOAA

In coastal communities, homes were damaged by the sea surge and hundreds of palm trees were stripped of fronds. In mountain towns, families had to be evacuated because homes were threatened by mudslides.

Lives are at stake

With nearly all 1.6 million electricity customers in Puerto Rico without power, the lack of fuel is a key problem across the island.

People are relying on generators to keep appliances such as air conditioners, medical devices and refrigerators running.

Many hospitals are struggling to treat patients and scores of people are lining up with gas cans for hours.

Twelve children hospitalized at the San Jorge Children's Hospital in San Juan depend on ventilators to survive, but the hospital has only a limited amount of fuel for generators, said Domingo Cruz Vivaldi, the hospital's executive director.

The hospital is the largest private children's medical center in the Caribbean. When the hospital ran out of diesel Monday, the ventilators had to run on batteries for hours until another hospital offered them fuel.

The hospital is working to secure more gas, Cruz Vivaldi said, because that diesel will only last for about two days.

At another hospital in San Juan, two people died in an intensive care unit after it ran out of diesel, officials said.

'People are starting to get desperate'

Before sunrise every day, dozens of people hauling multiple red plastic gas cans begin lining up at gas stations. They need fuel to start up their cars in case of an emergency or to keep generators running at home.

Some wait for up to six hours armed with lawn chairs and umbrellas.

"If the gasoline arrives it will fix our problems. Because people are starting to get desperate," said Utuado's Mayor Ernesto Irizarry.

At least 60 people have been arrested for violating the overnight curfew ordered by Gov. Ricardo Rosello to keep the island safe.

With supplies running out, many of the island's residents are collecting water from mountain streams.

Harry Torres said the water is all they have for cleaning and drinking until help comes. They've heard on the radio that FEMA trucks loaded with supplies have arrived on the island.

Puerto Rico and the US Virgin Islands have seen fewer personnel since Hurricane Maria hit than Texas and Florida during the recent hurricanes.

In a tweet on Monday, FEMA said more than 10,000 federal staff were on the ground in Puerto Rico and the US Virgin Islands assisting search and rescue and recovery efforts.

President Donald Trump has announced he will visit Puerto Rico on October 3, nearly two weeks after Maria struck the US commonwealth. The President inspected damage and rescue efforts in Texas and Florida in the immediate aftermath of the recent hurricanes.

Defending the federal response in Puerto Rico as "anything but slow" Monday, White House press secretary Sarah Sanders said the administration will be able to determine appropriate funds "once we have a greater insight into the full assessment of damage."

On Tuesday, Trump said the recovery was more difficult in Puerto Rico because of its geography. FEMA administrator Brock Long added that the limited operations at Puerto Rico's international airport were making it difficult to move resources into the area.