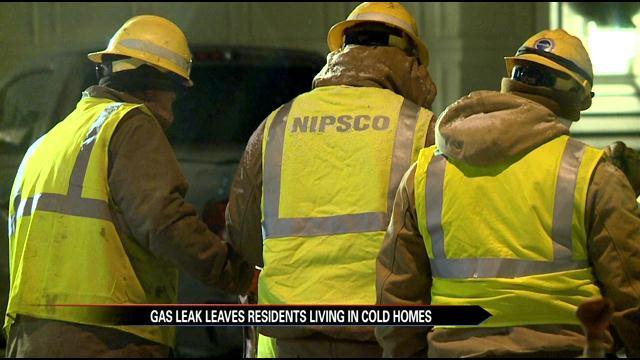 Some residents in Mishawaka are dealing with the cold temperatures inside of their homes due to a gas line break off of Lincoln Way East early Wednesday.

NIPSCO workers were still on the scene almost thirteen hours later, working to get heat for 52 homes.

Some of the residents in the neighborhood said the gas line puncture could not have happened on a worse day; the coldest day of the winter thus far.

While others are fortunate they are not the employees that were working in the below zero temperatures.

“Everyday it gets below freezing is a bad day for me!” said resident Robert White.

A bad day for the heat to be knocked out for nearly thirteen hours.

“The fire department was here, the water department, then they had to call the people to get the lines in the ground and they got those,” said White.

As crews worked to fix a water main break they caused bigger problems by puncturing a gas line.

White, who said anything below 32 degrees makes for an uncomfortable situation, was prepared for anything.

“I had two or three small fans and I went and grabbed three more over at Lowe's,” said White.

As he watches television he is sitting in a house at about 65 degrees.

He is not angry about the gas line puncture, in fact he is thankful for the men who are working in what many are calling dangerous wind chill conditions.

“Them guys have been out there working like crazy since this morning,” said White.

Some of the residents in the area said they were concerned with the strong odor of gas, though they are happy that they were not evacuated from their homes.
Share this article: