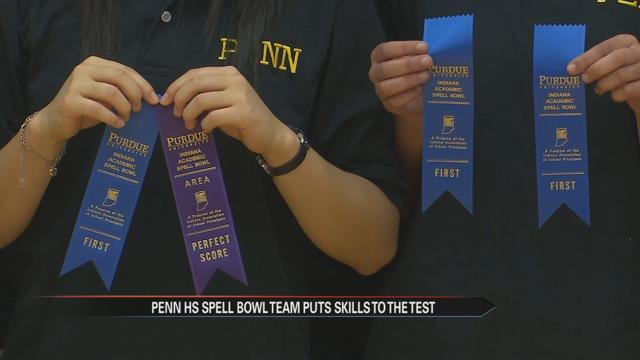 While the Cubs keep their eyes on the prize Wednesday in Cleveland, a high school spell bowl team is also hoping to fly the W. ABC 57’s Jess Arnold followed reigning champs Penn High School on their road to regionals.

In an otherwise silent room, you hear the reading of words, the flip of a page, and the scratch of a pencil.

And that’s how Penn High School has won 15 state championships to become the winningest spell bowl team in the history of Indiana.

“It’s validating of the effort that everybody puts in that it results in that level of success. We’re at the point now where we expect to be the state champion,” said Penn High School Spell Bowl coach Pete DeKever.

All of those championships happened under the leadership of the winningest coach.

“I mean if we didn’t have a coach that pushed us to do our best, then I don’t see why we would be here right now,” said first-time Penn High School speller, Hassaan Khan.

But spell bowl probably isn’t what you’re imagining. It’s not a spelling bee.

Not to mention, it only happens in Indiana.

“Our students are given 3200 words back in May,” said coach DeKever.

They study these words every single day, so they’re ready for competition.

“[In competition,] each word is said, and your task is just to write the correct spelling, and the proctor normally sits by you and checks the word, and then you raise your hand if you get it right,” said senior Penn High School speller Muqsit Buchh.

“All told, they’re probably spelling 50,000 words during the course of the season in one form or another,” said coach DeKever.

Some of these words are extremely difficult.

“If you miss a word, it’s like the whole team misses a word,” said Buchh.

That pressure makes winning all the more rewarding.

Now, they pursue perfection at Purdue as they try to stay the state champions.

The state championship competition will take place November 12 at Purdue University. If Penn High School wins, this will be their fifth consecutive win and 16th overall win.