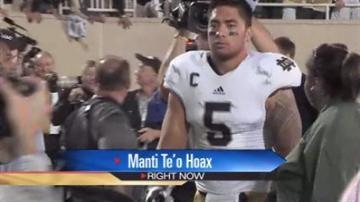 SOUTH BEND, Ind. -- Many questions remain about the hoax involving a woman Manti Te’o at one time called his girlfriend. Because Te’o has not told his side of the story yet, people are left wondering how it happened and what he knew.

Te’o is in Bradenton Florida training for the NFL Combine and has not been seen in public since the news of the hoax broke.

It was a heartbreaking story. Manti Te’o’s grandmother and girlfriend died on the same day. That news was revealed September 13, 2012.

"Ya know, he lost some people very close to him and it's obviously taken its toll on him,” said Kelly.

Despite his grief, Te'o continued to practice and played the next two weekends against Michigan State and Michigan.

He addressed the deaths and his coping process both in press conferences and on Twitter throughout the season.

The first details of Te'o's relationship with Lennay Kekua surfaced in the Sports Illustrated October issue.

Te'o revealed intimate details of the relationship including their frequent phone conversations.

But the major discrepancy is how the two got involved.

On October 12, the South Bend Tribune ran an article outlining, for the first time, how Te'o and Lennay met at Stanford in 2009.

However, Te'o released a statement to ESPN on Wednesday claiming the relationship was entirely online.

During his press conference Wednesday night, Notre Dame Athletic Director Jack Swarbrick laid out a timeline of how the hoax unfolded.

He says Te'o received a phone call from his deceased girlfriend's phone number on December 6, but told no one, so that he could talk to his parents.

However, at that time, Te'o was with his parents in Orlando for the awards tour.

The Te'os then waited until the 26th of December to tell coaches and staff at Notre Dame.

The university began a private investigation on the hoax and the results were returned on January 4th.

We are still waiting to hear from Te'o to fill in some of the seemingly unexplainable holes in the story.

We have also reached out to the coaches and are waiting to hear back.