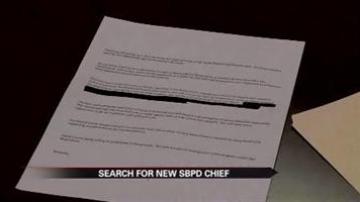 SOUTH BEND, Ind. --  The finalists for the South Bend police chief are expected to be named by the end of the week.  While we do not know who Mayor Pete Buttigieg will choose, we know who is not getting the job.

"We have got a lot of applications. We have narrowed down the finalists. We will share that with the public quite soon," said Buttigieg.

Buttigieg's race to find the new police chief is coming to an end, but some candidates have already been eliminated before they even crossed the finish line.

"I am not ruling anybody in or out based on if they are inside or outside candidates," said Buttigieg.

But  last  week all the local candidates within the police department got a rejection letter in the mail.

"It's almost insulting that someone from our police department would not get picked for the chief's job," said Dieter.

He said the candidates within the police department are more than qualified for the job.

"I think it is very important when you have qualified members of the South Bend Police Department that have grown up here and have spent decades working within the police department," said Dieter.

He said almost everyone else agrees with him.

"Interim Chief Hurley recommended that the chief come from within the police department itself three quarters voted and would like to see an internal chief," said Dieter.

Ultimately the police chief will be appointed by Mayor Buttigieg.

"The council and myself acknowledge this is the mayor's choice this is his decision," said Dieter.

But Dieter wishes the mayor would have turned to the council for their input as well.

"You would think with nine members of the council all the members and their experience in the community and him not being in a year yet that he would lean more on the council for our  perspective," said Dieter.