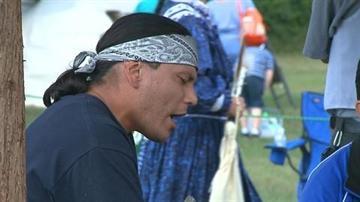 SOUTH BEND, Ind. – The steady beating of the drum resonated across the open fields as representatives of nearly a dozen Native American tribes danced around the arena. The Labor Day weekend powwow at the park marked the 26 year it has been held in South Bend during the holiday.

Started in 1985 by the Pottawatomi Indians, the tribe decided to move the event north of the state line into Michigan in 2005. Since 2006, Jonathan Ogemaw Fowler, an Odawa Indian from the Grand Traverse area of Michigan, has organized the event.

Fowler has continued to breathe life into the powwow, bringing in long time friends and supporters of the powwow, annually. “We know each other, we’re friends and we visit their areas and they come and visit ours; so it’s like it connects us as one big family,” said Fowler.

Fowler also says history is another good reason not to let powwows like this one slip away. “This was really a crossroads for all of America, especially when the first pioneers started coming right through here; this was quite the trafficked area for native and non-native [people],” said Fowler.

The trade in commerce and culture that was shared then is continued today in a similar fashion. An estimated 500 people attended the 2011 powwow.

Some of those in attendance had little to no previous exposure to Native American culture. “Coming here I was able to learn a little bit more and the people here are very perceptive to our questions; so that we can get a little more in-depth than you usually would,” said Laura Vincent, a first time powwow attendee.

Vincent came with a friend from college but vows to return next year. She plans to bring her family with her as well. “I’ll be bringing my son back and my husband with me,” said Vincent.

It would be a welcome boost in attendance. This year total attendance was lower than normal. On holiday weekends like this year, where Notre Dame has a home game, the powwow knows numbers will be down.

Fowler tells me, normally, many people swing by after the game. This year, however, weather was not on their side. As thunderstorms rolled in Saturday afternoon, the powwow shut down. They didn’t want to risk anyone getting hurt.

The excessive heat prior to the storm took its toll on dancers and attendees, as well. Sunday was a much better day, said Fowler.

With cooler temperatures and partial cloud cover, more people stopped by on Sunday than the previous day.

Fowler says, with all the options people have for powwows in the region, and with the crazy weather they experienced this year, he is still pleased at the turn out. He is also looking forward to next year, and sharing Native American culture with hundreds all over again.
Share this article: