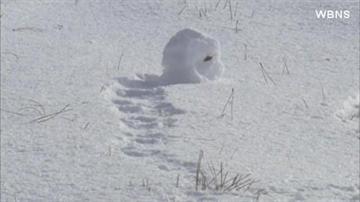 They come in all shapes and sizes. Some are solid, others have holes.

They're chunks of snow that catch your eye along the side of the road as if someone was trying to roll up a big snowball.

But they were all made by Mother Nature.

It's a rare weather phenomenon where strong winds blow chunks of snow to create solid or donut-shaped snowballs.