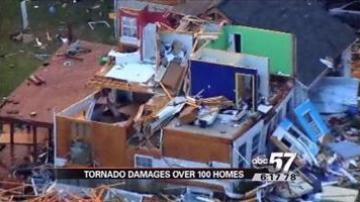 DEXTER, Mich. -- No one was hurt but a rare tornado in Southeast Michigan caused widespread damage on Thursday!

The powerful storm tore through the town of Dexter, leaving a path of destruction 10 miles long!

More than 100 homes were damaged.

Some were completely flattened.

"You don't even have enough time to pray or kiss yourself goodbye.  I mean it's, you just sit there and wait and you just hope that you're going to be there at the end," said Brittany Keller, tornado survivor.

The state usually does not get tornadoes in March, but there is a threat of more severe storms this weekend!