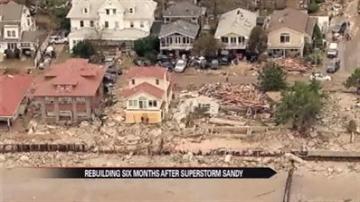 Residents on the East Coast are still recovering from Superstorm Sandy that hit the area six months ago.

"I'm taking it day by day. My head is spinning from everything that happened here," said Madeline Fradella.

New York state is offering homeowners 100 percent of their homes' "pre-Sandy" value if they stay on the island and just move to a different town.