Recap: Hottest summer since 2012 comes to a close

Recap: Hottest summer since 2012 comes to a close

The last day of August has arrived, meaning the swan song of meteorological summer 2020 is here too.

As has been the tradition with everything 2020, this summer generated many headlines, from dozens of 90 degree days to a near-record long dry streak in South Bend.

Throughout the months of June, July, and August across Michiana, temperatures have remained on the warm side, to say the least. This summer will finish tied for 11th place in terms of the warmest summer on record in South Bend. The average temperature was just a hair below 74 degrees, and the season was almost 3 degrees above normal! 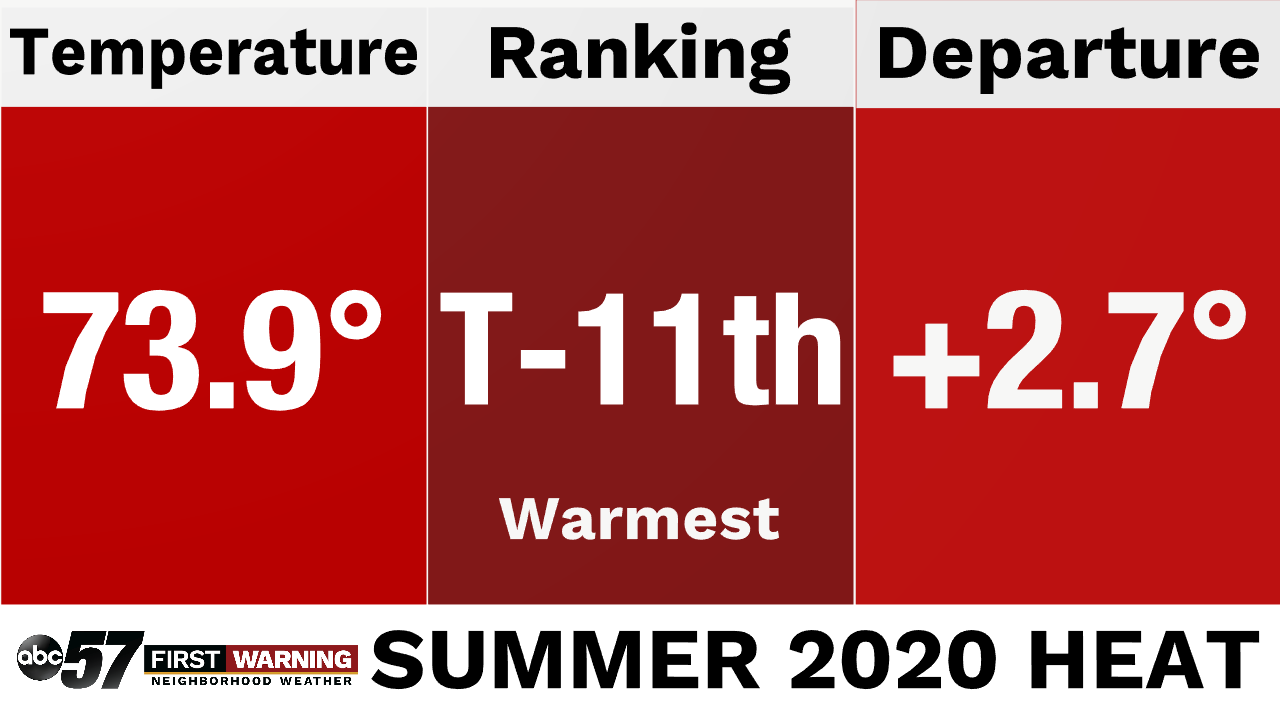 The big story of the summer heat was our abundance of 90-degree days in South Bend. In total, 3 weeks worth of 90-degree heat visited Michiana in 2020- the most since 2012. 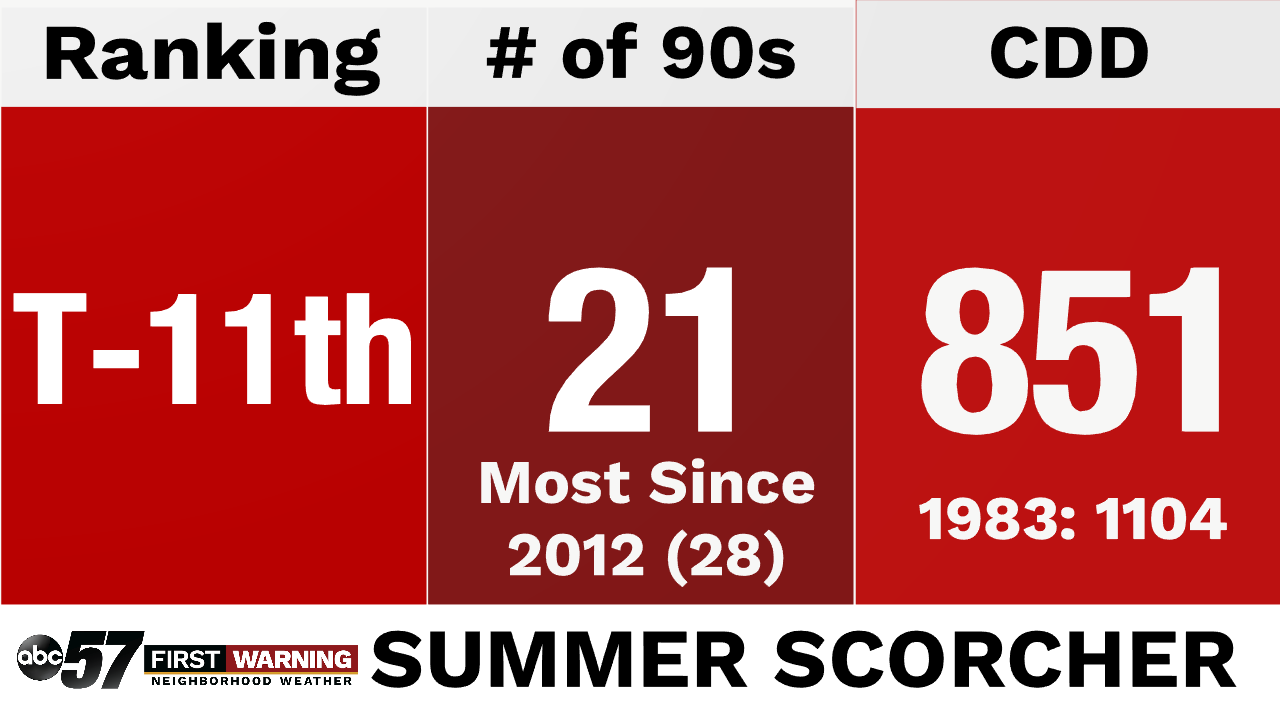 But if you're thinking the 90s are done now because summer has ended, you may need to think again. South Bend has recorded at least one 90-degree day in September or later each of the last 10 years.

South Bend's cooling degree days also spiked this summer. While nowhere near the record set back in 1983, our CDD was the highest since 2012, meaning our A/C was most likely working harder than it has in almost a decade.

But the heat didn't just find Michiana during the daytime. Plenty of nights were above 68 degrees during the past three months. The warm nights and hot days combined to make for 34 "extreme heat events" as defined by the Hoosier Resilience Index. That's more than 50% higher than what Michiana experiences during a typical year and closer to what the norm could be if climate change is not properly addressed. 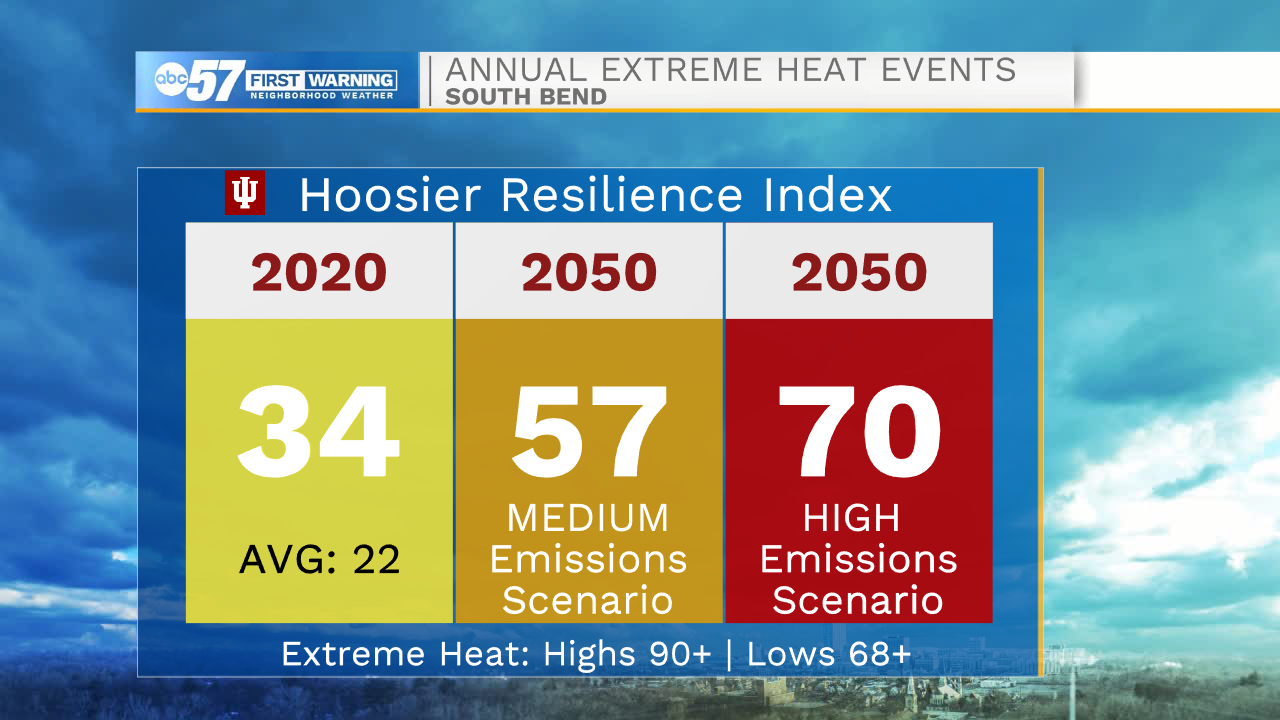 Summer 2020 Rainfall: You Have To Fight For Your Right to Rain

It seemed like widespread rain waited until the last minute to arrive this summer. Helped by more than an inch of rain during the last few days of August, Summer 2020 finished in the middle of the pack of driest summers on record. 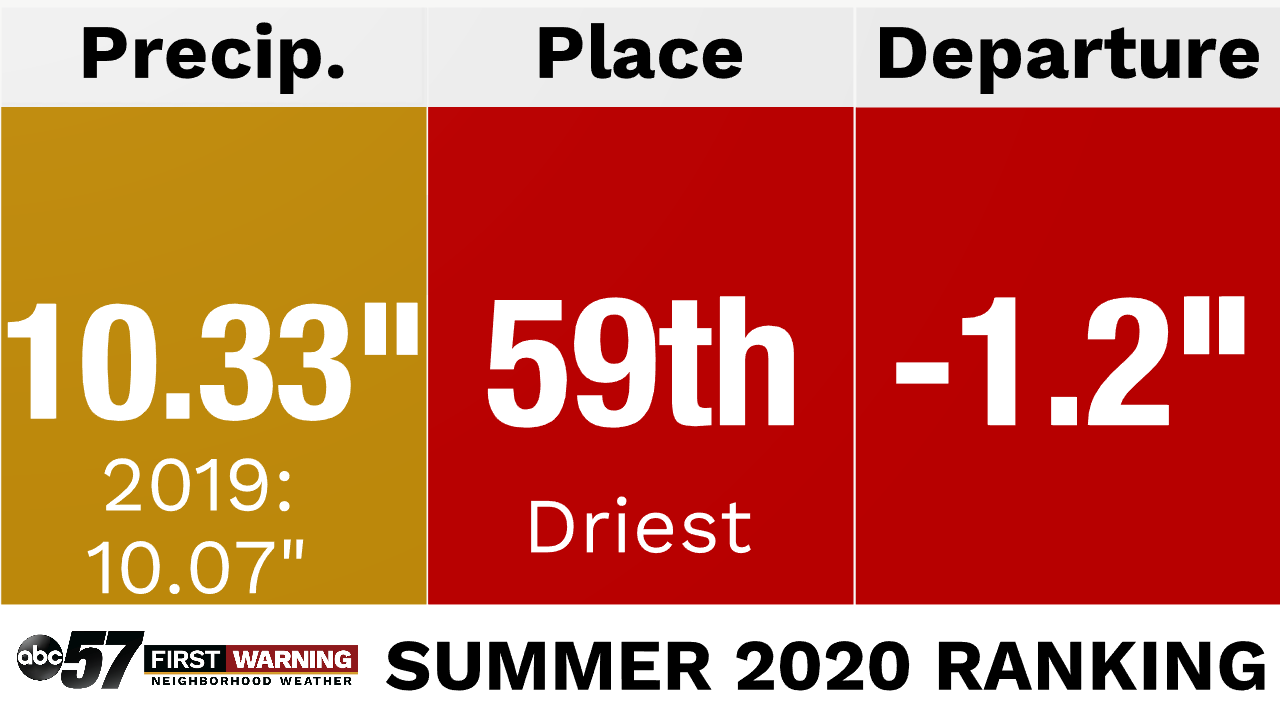 In terms of total seasonal rainfall, Summer 2020 finished similarly to Summer 2019, with just over ten inches of rain. However, we're still set to start meteorological Fall of 2020 with a rainfall deficit of more than an inch.

While our numbers may look eerily similar compared to 2019, it was harder this year to get many days of "significant rainfall." We're defining a day of significant rainfall as a day with more than a quarter of an inch of rain. This summer, only 11 days can hold that title of bringing us especially helpful rain. 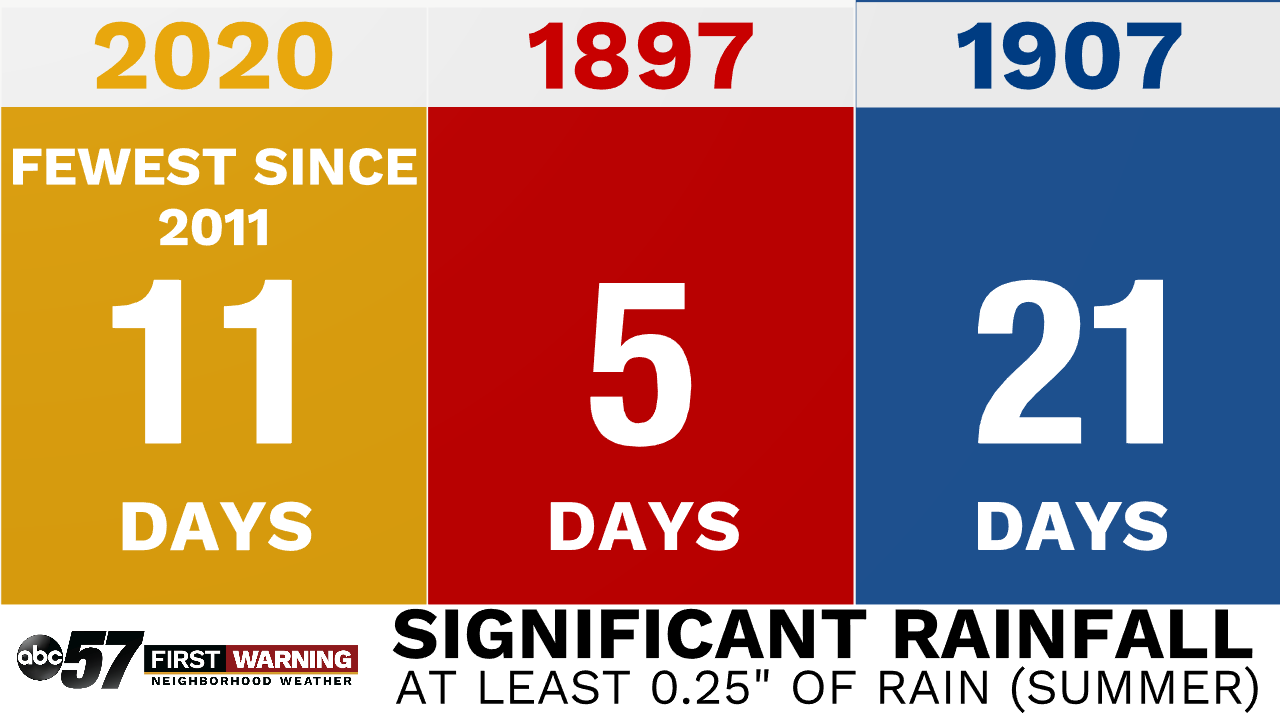 This August almost saw Michiana break a monthly record for the longest stretch without rain. Thirteen days past without a drop of rain in South Bend, which is only two off of the August record set most recently in the 1950s. 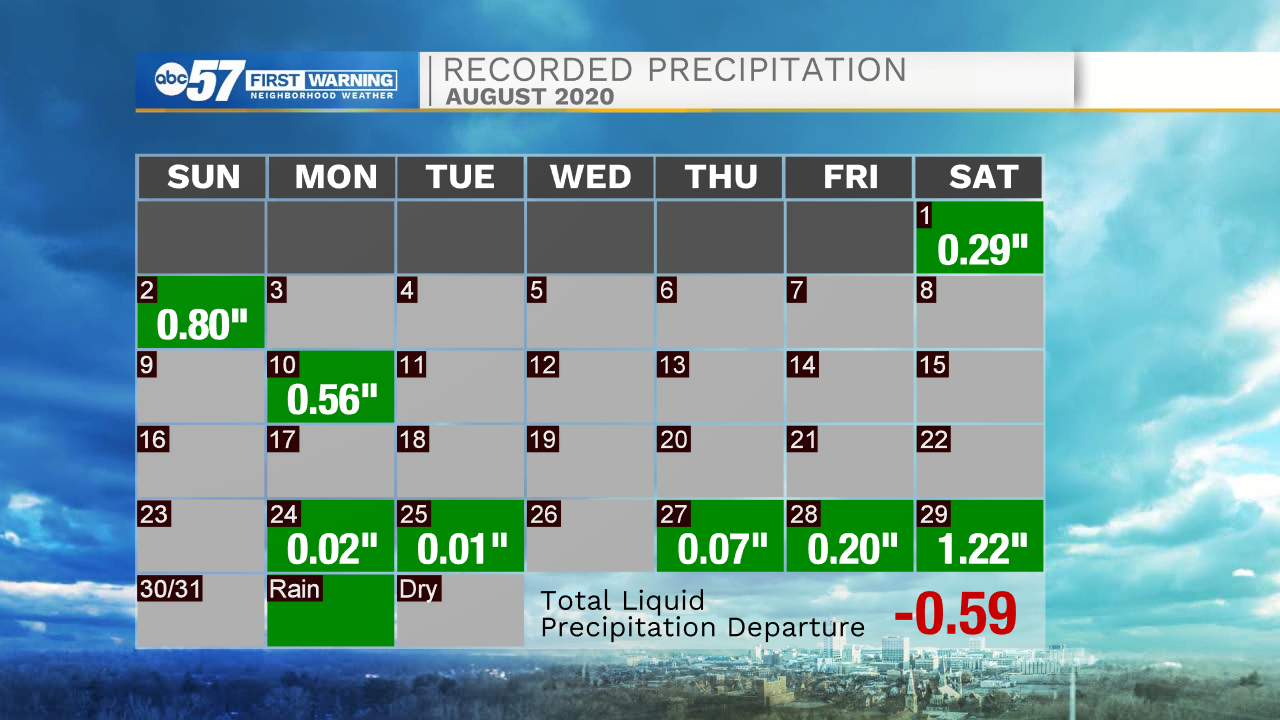 All of Michiana is entering September 2020 on an abnormally dry note, and some, including South Bend and Elkhart, are in the midst of moderate drought. We'll see later this week if the heavy rain last week made a dent in the drought.

Contributions to this story also made by: Tom Coomes
Share this article: