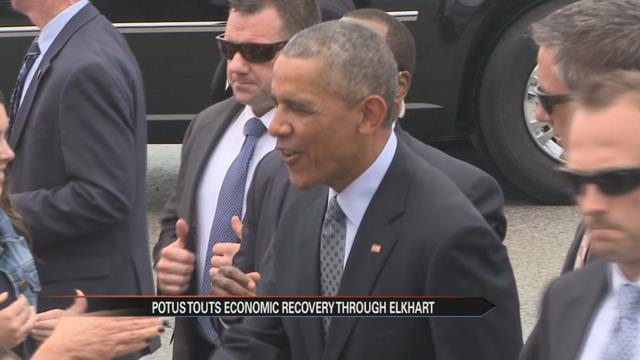 All eyes were on Elkhart Wednesday as President Barack Obama made a return to the city seven years after his first visit. And just like in 2009, he made his remarks at Concord High School.

The presidents remarks in Elkhart made lots of waves nationally, as he blasted back at critics of his policies. Obama listed every major economic achievement of his presidency, including auto industry changes. He also got the crowd fired up and ready to go for the 2016 election.

Obama used Elkhart as a prime example of the nations economic turnaround. Since his first speech here, the Elkhart unemployment rate dropped from 19.6 percent to 4.1 percent. Obama says that's proof of a bolstered economy.

"We can see the results, not just here in Elkhart, but around the nation," said Obama. "By almost every economic measure America is better off than when I came here at the beginning of my presidency. That's the truth."

The president also held a town hall at the Lerner theater, hosted by PBS Newshour.

To a crowd of Elkhart county residents, he took the opportunity to comment on the 2016 race for his successor and what has contributed to the rise of Donald Trump in the Republican Party.

In a statement, Republican National Committee spokesman Michael Short says Obama is trying to convince voters "his record of weak growth, stagnant wages and a shrinking middle class is really a success story." He cites fewer manufacturing jobs as a cause for concern.