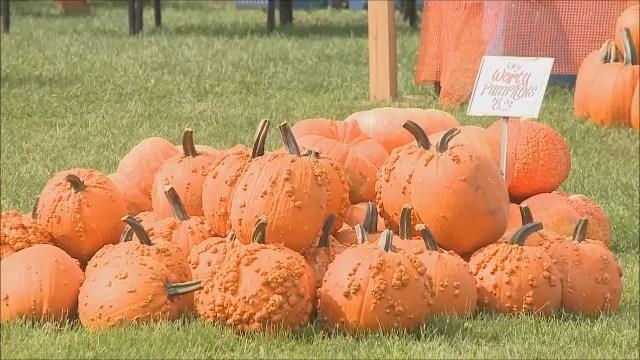 It’s the first day of fall which makes you think pumpkins, right? But after this season’s heavy rainfall, many farms flooded in South Bend, which means pumpkin patches saw way more water than usual.

Siblings, Dave and Jenny, who own Thistleberry Farms in South Bend say they just had to bear the burden of flooding back in August.

“We had enough of a river going through our low area of our play area that we had tires around our small pedal car track that ended up over by the corn maze,” said Jenny Sipes.

But pumpkin picking all comes down to one thing.

“If their pumpkins were on lower ground or ground that held the water, pumpkins don’t like sitting in water at all. They start to mold and mildew and rot,” said Frushour.

While some parts of Michiana had too much rain, others just didn’t get enough.

“They didn’t get near as much rain in Marshall County as we did and so and pumpkins really like a decent amount of rain for them to grow right so they’re actually suffering because they didn’t get the rain that we did.”

As for the flooding in South Bend, that won’t affect pumpkin plans for Dave and Jenny this year.

“All the activities are looking good and right now the weather is nice and warm so we encourage people to come out,” said Freshour.

Since area farms are doing pretty well, you are good to go on your pumpkin picking. Farms are opening up for the season and some are already open on weekends.