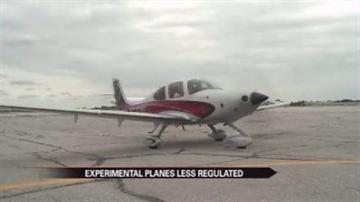 SOUTH BEND, Ind. -- In the past month, there have been four separate emergency plane landings or crashes in Michiana. Two of those incidents, including the fatal crash Monday in Starke County, involved experimental or homemade planes.

The FAA has less stringent regulations for experimental planes, but only licensed pilots can fly them.

"Once you get in the plane and you're by yourself and you're ready to wind it up, there's something that's hard to describe," said Bob Baird, pilot and plane builder.

For Baird, the thrill of building a plane and then flying it is exhilarating

"There you are after a year or two of building this thing and it's pretty hard to top," said Baird.

Before Baird could fly his homemade planes, he had to learn the FAA regulations that govern experimental planes.

"The requirements are extremely broad for experimental guys. They can be airplanes that are more like a jungle gym set, canvas and tubes and wires. Or they can be highly sophisticated aircrafts from kits that are very expensive," said Baird.

Large manufacturers like Boeing, Cessna and Piper are highly regulated because those planes are mass produced. There is no room for creativity or experimentation.

But for plane enthusiasts, the sky's the limit for aviation alterations.

The alterations can be extremely risky, but if not for experimental homebuilt planes, Baird says the aviation industry wouldn't be what it is today.

"It's just a certain type of personality that's attracted to this and sometimes we lose guys like we have recently and it's sad but if there were no risks, there would be no adventure," said Baird.

There are no requirements for someone to start building an aircraft.

There are companies that sell kits similar to model airplane kits to build airplanes.

However, the FAA does test the airworthiness of the plane before it is put in flight.

The plane also requires 25-40 hours of test flight time before passengers can fly in the plane.