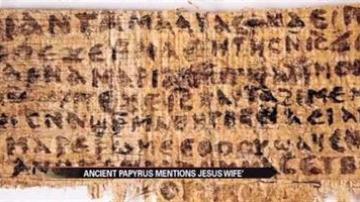 Some new information on an ancient piece of paper could have major implications for the Christian faith.

A small fragment of faded papyrus was found that contained revelating news that Jesus Christ was married.

A Harvard professor discovered the fragment and says that the text of only 14 lines is from a fourth century dialogue between Jesus and his disciples.

The professor claims that Jesus spoke of "my wife."

The belief that Jesus was not married is one of the main reasons why Catholic priests are not allowed to marry.