Records could fall this weekend 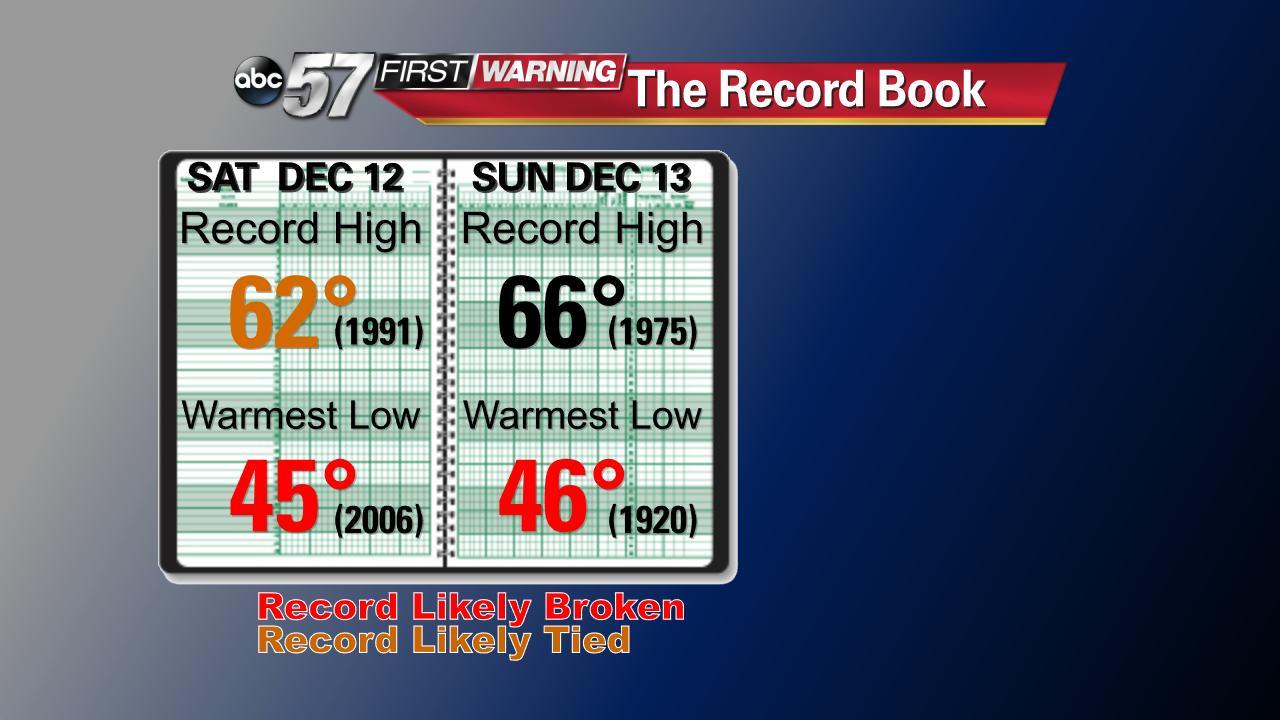 Update FRI DEC 11: The records most likely to to be broken this weekend will be the warmest lows Saturday and Sunday. Saturday high is also in jeopardy. Rear more below. Even though the record warmest December 10th was set in 1971 with a high of 64°, the second warmest was 58° in 1897.  Today's high of 59° observed at 3:59PM knocked the 118-year record-holder out of it's 2nd place rank.  As we look ahead towards Friday, Saturday, and Sunday, the unseasonably warm weather sticks around, with possibly more impressive record-breaking results.

The four graphics below show the Top 3 Warmest for December 10th, 11th, 12th, and 13th.  Like today, December 12th and 13th have the potential to tie the record or make the Top 3, respectively.  December 11th shows the forecasted temperature in a green box, as opposed to the orange box in the other three images.  This means that even though it will be unseasonably warm (the normal high for this time of year in South Bend is 36°), Friday is unlikely to be record-breaking. As we look ahead towards Saturday, December 12th, as previously stated above, we could tie for the record warmest with 1991.  Not only is that record up for grabs, but the low temperature observed on Saturday night into Sunday morning could also be record-breaking.  The overnight low forecasted for that night is 52°, well above the average low of 23° for this time of the year.  This forecasted low also shatters the record low max of 45° set back in 2006.  The image below shows it in a more structured way. With temperatures warming-up into the 60s, it's easy to forget that we are approaching the second weekend of December and we're nearly ten days away from the Winter Solstice (the astronomical start to the winter season).  Instead, it's feeling more like the middle of fall than mid December.  Normal highs in the lower 60s typically occur on October 15th, with Halloween's high typically dropping into the low to mid 50s. As mentioned, we are tracking near record-breaking warmth this weekend, but this also comes with the threat of rain showers.  Be sure to check back here for the latest timing of those showers.  Don't forget, if you own a smartphone, you can download the free ABC57 First Warning Neighborhood Weather App to access your hour by hour forecast, as well as your daily weather webcast.