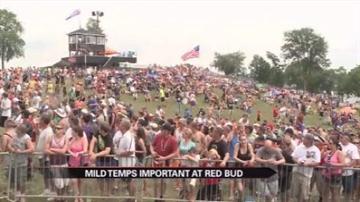 Last year the heat was so intense that medics had to help hundreds of people.

Even though the temperatures were more mild this year, emergency responders were still prepared.

"We're still keeping an eye on it obviously, but the fact that we're only looking in the 80s right now is definitely helping out a lot more," said medic Andrew Hartman. "We're not hitting those 100 degree temperatures like we were last year."

With the exception of a few minor cuts and bruises, there were no major injuries reported at the race.