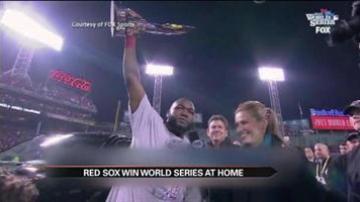 BOSTON -- Most Red Sox fans are not old enough to remember the last time their team won the World Series at Fenway way back in 1918.

Last night the Red Sox did not disappoint their fans- and became the World Series champs for the third time in a decade.

The 6-1 win over the Saint Louis Cardinals in game six of the series was seen as a victory not just for baseball fans but the entire city.

"This is for you, Boston! You guys deserve it," said World Series MVP David Ortiz.

Some fans celebrating got out of hand with reports of overturned cars and at least 9 arrests. Now the city is preparing for Saturday's victory parade.