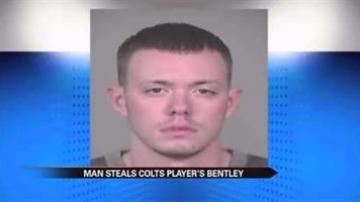 INDIANAPOLIS -- A simple trip to a hotel did not turn out exactly as planned for Colts wide receiver Reggie Wayne Saturday night. An Indianapolis man reportedly took Wayne's Bentley on a drunken joy-ride before police arrested the driver early Sunday morning.

Wayne left the car with the hotel valet and when he return to later to get it, the car was gone.

Police later discovered the 21-year-old man had been pulled over for drinking and driving. The driver told police he was Wayne's cousin, which is not true.